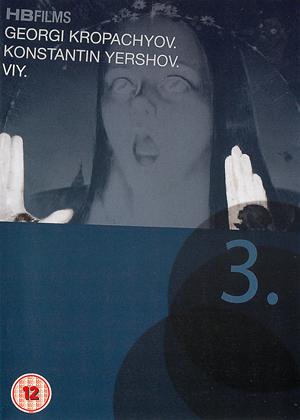 Synopsis:
Khoma, a young novice Monk, travels across the Ukranian countryside whilst on a break from his seminary, and stays for one night in a barn belonging to a seemingly harmless old woman. Whilst sleeping the old woman attacks him, displaying supernatural strength. The scared novice fatally wounds her while fending her off. But before dying, she transforms into a beautiful young woman. Some time later Khoma, is called to the estate of a rich Kosack landowner, grieving the death of his daughter. Khoma has been personally requested to attend, and against his wishes taken by force to the estate. There he must pray for three nights in the chapel until the body of the landowners daughter is buried.
On the first night, the woman Khoma had killed rises from the coffin and tries to kill him. Khoma must use every skill he knows for the next 3 nights to prevent this from happening.
Actors:
Leonid Kuravlyov, Natalya Varley, Aleksei Glazyrin, Nikolai Kutuzov, Vadim Zakharchenko, Pyotr Vesklyarov, Vladimir Salnikov, Dmitri Kapka, Stepan Shkurat, G. Sochevko, Nikolai Yakovchenko
Directors:
Georgi Kropachyov, Konstantin Yershov
Studio:
HB Films
Genres:
Horror
Countries:
Russia, Horror

This strange, folk fairy-tale technicolour nightmare begins with a band of young novice monks eagerly waiting to begin their vacations. Mischievous and cheeky, they waste no time in time in scouring the countryside in search of food and girls. Before long, three of their number are lost and, rather than sleep under the stars, call upon an abandoned farmhouse where they are reservedly welcomed by an old crone. She takes a seeming fancy to Khoma (Leonid Kuravlyov) and he finds himself apparently being seduced by her late at night. Within moments, they are flying through the darkened skies, and a panicking Khoma realises she is a witch. Somewhat ungratefully, he beats her to near death and, shortly before she expires, she becomes an attractive young woman.

Beyond this, events become darkly farcical. Based on a story by Russian surrealist writer Nicholai Gogol, this adaption is resplendent in a stagey atmosphere that renders everything slightly unreal, and terrific direction by Georgi Kropachyov and Konstantin Yershov. The result is a genuinely unnerving, deliberately child-like gothic extravaganza, with humour and illusion, all liberally laced with superb horror trappings. Kuravlyov is excellent throughout, never adjusting his performance amidst the constant shifts in tone around him. For a hypocrite and a murderer, Khoma is extremely likeable. It is he who has to remain in the chapel with the corpse for three nights in prayer, and inevitably, she rises from the dead on more than one occasion to try and kill him. Natalya Varley stars as the wraith-like Pannochka, adorned very much in the style of horror maidens and goth girls, and is very unsettling with her skittering movements and blind, wild-eyed flickerings.

This is a mad, whirling experience, resplendent in its nightmare imagery and awash with special effects. Despite the deliberate staginess, it hasn’t really dated – especially due to Kuravlov’s naturalistic acting – and yet its style harkens back to the theatrical tone of the silent films. Above all, it is something *different*, and that is nearly always a good thing.