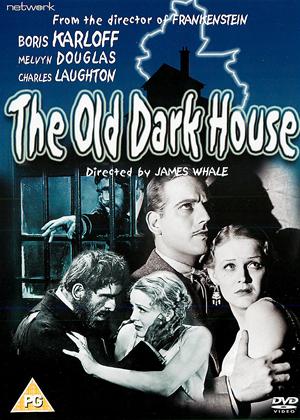 Synopsis:
A group of weary travellers, a spooky mansion, and a madman on the loose upstairs! Director James Whale's 'The Old Dark House' is one of the best and most entertaining horror films of the 1930's. Caught in a storm whilst journeying through a remote region of Wales, a group of travellers take refuge in a sinister mansion inhabited by the bizarre Femm family and their mute butler, Morgan (Boris Karloff). Trying to make the best of a bad situation, the group settles in for the night, but the Femm family have a few skeletons in their closet, and one of them is on the loose...
Actors:
Boris Karloff, Melvyn Douglas, Charles Laughton, Lilian Bond, Ernest Thesiger, Eva Moore, Raymond Massey, Gloria Stuart, Elspeth Dudgeon, Brember Wills
Directors:
James Whale
Producers:
Carl Laemmle Jr
Writers:
J.B. Priestley, Benn W. Levy
Studio:
Network UK
Genres:
Classics, Horror, Thrillers

Reviews (2) of The Old Dark House

Even the Welsh ought not to sound like that ... - The Old Dark House review by NP

Following the huge success of Frankenstein the year before, director James Whale once again worked with Boris Karloff in this very loose adaptation of JB Preistley's Benighted novel. Whale's black humour, coupled with Universal films' love of horror at that time, produced one of the most enjoyable eccentric films I remember seeing.

The cast list is incredible - Daniel Massey, Karloff, Melvyn Douglas, Gloria Stuart and Charles Laughton spend a night in the house of the title, presided over by prissy, jittery host Horace Femm, played by Ernest Thesiger (who all but steals the show with his wide eyes, hollow features and nervy mannerisms).

The travellers are forced to take refuge there because of the impressive storm that every good horror film should have.

"Beds! They can't have beds," shrieks half deaf Rebecca Femm.

"As my sister hints, there are no beds," announces Horace with perpetual disdain.

Also in the house are two other Femm relatives. Roderick, 102 and bedridden, warns them of brother Saul. Roderick is actually played by a heavily made up Elspeth Dudgeon.

When Saul is finally revealed, he is a frightened, tortured man. That is, until backs are turned and his face turns into an insane leer - Saul is as mad as the rest of them. Dangerously so!

This film was considered lost for quite a time, but thatnks to James Whales' friend and fellow director Curtis Harrington, can still be enjoyed in all its creepy, bizarre glory.

At first this film appears simply comic, and it keeps that up, with some droll dialogue throughout, but there is an underlying, genuine fear which goes deep, an echo of J.B. Priestley's original novel (Benighted) which is rooted in post-Great War disillusion.

Everybody who saw Gloria Stuart in Titanic (1997) should be sure not to miss her appearance in this, sixty-seven years earlier. That is surely a leap across time.