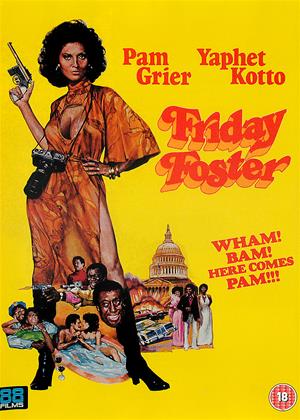 Yes, it's another of those films hailed as a "classic" because it was made longer ago than last week and the reviewer needed a random adjective! Also, Quentin Tarentino likes it so it must be good. Actually it's the least popular of the three crude blaxploitation B-movies Pam Grier used to be slightly famous for, until she became a lot more famous for starring in Tarentino's overrated homage to those films.

In other words, it's not terribly good. All the usual blaxploitation tropes are trotted out. Black people say and do exaggeratedly black and very seventies things, and the usual cardboard stereotypes pop up, such as the jive-talking pimp who has nothing whatsoever to do with the plot, but all blaxploitation films were contractually obliged to include a jive-talking pimp. We also get all the usual action thriller clichés: fist fight, gun fight, car chase, rooftop chase, cat-and-mouse with a killer in a derelict building, all the boxes are ticked. Yet it isn't very thrilling. The action is very flatly directed, and apart from the inevitable big gunfight at the end, there isn't really all that much of it.

One problem is the source material, a cartoon strip which you'll be familiar with if you read American newspapers between 1970 and 1974, but otherwise you won't have any more idea than I did who all the minor characters we're obviously supposed to recognise are. It's also not the best idea in the world for the heroine to be a fashion photographer with no combat skills or special qualities other than bravery and looking like Pam Grier. It might have worked as a comedy in which the recklessly bold Friday wasn't so much plucky as suicidally stupid, but as the feminist icon she's sometimes rather desperately held up to be, she's downright ludicrous! In particular, there's a scene where she goes to great lengths to put herself in extreme danger, having apparently forgotten that a tough private eye with a gun who also happens to be her best friend (Yaphet Kotto in a thankless rôle) is literally standing next to her! But of course, she's the star of this movie and he's only a supporting character, so he doesn't get to help her out all that much, even when he obviously should have.

As the confusing plot muddles its way to a hastily-explained resolution, the action constantly pauses while we're treated to various set-pieces that presumably tie in with the long-forgotten comic-strip, such as Eartha Kitt putting on a totally irrelevant fashion show while overacting so atrociously that even the characters in the movie notice, and a scene the political correctness crowd won't like too well in which black homosexuals are not only mocked as simpering freaks but turn out to be despicable race traitors too, because if you're willing to do one disgustingly unnatural thing you're obviously into them all. Pam Grier is very likeable, but in terms of both appearance and acting ability she's basically the black Raquel Welch. Overall this is a very minor B-movie in a genre which didn't last long because once the novelty wore off it had nowhere left to go. By the way, that 18 certificate is justified by a bit of blood, one not very explicit sex scene, a few gratuitous topless shots and some mild swearing, but this is really a fairly mild 15 that hasn't had its classification reviewed in decades.