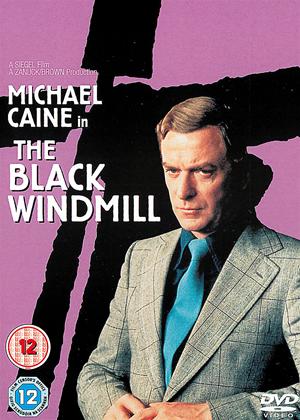 Reviews (2) of The Black Windmill

Don Siegel gave the world, amongst other things, "Dirty Harry", "The Invasion of the Body Snatchers", and "Flaming Star', which is that rarest of beasts, a good Elvis Presley film, so even though he was in many ways America's answer to Michael Winner, he wasn't exactly a no-talent nobody. And in 1974 Michael Caine was an A-list star. So why had I never even heard of this movie until now?

Unfortunately the answer to that question turns out to be the obvious one: it's terrible. "Riveting", says the description on the previous page. Yes, I suppose it is, in the sense of being a clunky assemblage of mismatched parts held together with obvious bolts. Its problems become apparent even before it's properly begun. A children's choir sings "Under The Spreading Chestnut Tree" while the opening credits are spelled out in gaily-coloured alphabet bricks over footage of two schoolboys playing in the countryside. Will this movie be about sinister goings-on at a school or something? Nope. The two boys are very marginal characters indeed, it isn't about childhood at all, and that song has nothing to do with anything. Someone, presumably the director, must have decided that starting the film in a quirkily original way was what mattered, and whether or not it fitted thematically with everything else was beside the point. Which sums up most, though by no means all of what's wrong with the entire film.

This is what I call an ATTH movie: And Then This Happens. Strangely disjointed events occur one after another as if the script started out as a list of bullet-points and some unfortunate screenwriter had to join them up as best he could. The bad guys do things that serve no purpose other than to establish their badness, and then clumsily attempt to justify them to each other and the audience. The dialogue is howlingly dreadful, especially the moment when the villain casually reveals a vital clue to Michael Caine for no reason at all because if he hadn't the film wouldn't have had an ending. And, worst of all - this, by the way, is the most abysmal piece of screenwriting I've ever seen in a movie from a major studio - in one scene Michael Caine has to do a convincing impersonation of Donald Pleasance's character over the phone, but unfortunately his acting skills don't quite stretch to sounding exactly like whoever his co-star happens to be. This film's solution? Donald Pleasance is forced to play his entire part as if he's doing a bad impersonation of himself. Yes, really.

I'd give it two stars because the incredibly inept script makes it sort of watchable in all the wrong ways, but I'm docking one for the gratuitous scenes of young children repeatedly being brutalised just so we know the baddies deserve to be killed. This is Don Siegel at his worst. He even manages to clumsily shoehorn drugs into the plot in case we've forgotten that hippies are evil. Also, there's very little indeed of the action you'd expect in a Don Siegel thriller, because action costs money, and most of the budget appears to have been blown on moving the story from London to Paris and back again for no discernible reason. So instead of thrills, we get a lot of obvious padding in which peculiar characters behave quirkily. Imagine a version of "Taken" in which almost every scene where anybody dies is replaced by footage of Donald Pleasance pretending to be someone pretending to be Donald Pleasance. It really is like that, only worse. Michael Caine sleepwalks through most of his scenes, and Donald Pleasance looks genuinely miserable. I don't blame either of them.

Not really much of a story beyond a child's kidnapping, whose father happens to be an agent for MI6. Poor acting, many scenes shot in semi-darkness. 1970's style dialogue. Not a great film by any stretch of the imagination and Threiller is a mis-representation of the genre.