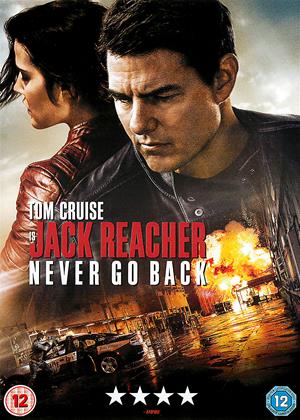 Rent other films like Jack Reacher: Never Go Back

This is an old-fashioned film with an old-fashioned vibe. Tom Cruise is on the run from baddies with a woman and a daughter in tow. Yep, he’s saddled with one of those annoying teenage daughters that American filmmakers seem to love. In the DVD Extras Tom calls it a ‘crime thriller’ but to call that an overstatement would be an understatement.

Patrick Heusinger makes a worthy baddie but otherwise everything about the film is lazy, dull and uninspiring. None of the characters convinces. The plot never develops any momentum. The action is too low-key to be exciting. Edward Zwick directs with little flair. The by-the-numbers climactic fight even takes place during a clichéd New Orleans parade. Is that the best they could come up with?

An average sequel to an excellent film - Jack Reacher: Never Go Back review by TB

The first Jack Reacher film was a big surprise. Despite the endless criticism about Tom Cruise's casting because of his height (get over it, people) the first film was a great thriller. Cruise was great, the stunts/combat and car chase were excellent and Werner Herzog was one of the best villains in recent memory. Although there was some doubt about whether a sequel would appear, due to the fairly moderate box office, we now have Never Go Back.

In many ways it tries to improve on the first film and to flesh out the character of Reacher. This has mixed results and although it starts strongly, by about halfway the only real verdict I came to was "Average." It's not your standard action schlock and it must be said that the scenes in New Orleans are shot beautifully, proving that Ed Zwick (who also worked with Cruise on The Last Samurai) is a skilled film-maker.

But after so much promise from the first film, its disappointing that this is what follows it. And after this film's box office takings (significantly lower than Jack Reacher's) it's highly unlikely we will see the character either played by Cruise or appearing again soon.

No plot, chase around rubbish. - Jack Reacher: Never Go Back review by IR

A total waste of time. What were you thinking Tom ? I nearly fell asleep through it but all the random explosions and car breaks kept me awake.

Never go back is an apt title. - Jack Reacher: Never Go Back review by NC

Tom getting to look like the van-driver next door a bit now. Pretty much standard bish bosh. Watered down Mission Imposs. Small ageing guy can flatten everyone that moves, in his dreams at least, pretty well copied format by countless other films.

Not quite as good as the first one. - Jack Reacher: Never Go Back review by TB

This film didn’t quite have the same level of plot or action as the first film and gave some of that up to spend more time focusing on the background and character of Jack Reacher. However, it was far from just being two hours of a character assessment and still had a good enough plot, along with enough action and humour to make it another enjoyable Reacher film.

Marked the first film as a four and would certainly give this a 3.5 if possible.

I’m not a big fan of Tom Cruise and can easily count on one hand the movies of his that I like (Collateral being the best) but in these I really think he plays the character well. However, I’ve not read the books and have been told that he’s an odd choice in stature to play the character from the books but don’t let that put you off.

Jack Reacher is an action hero that has the common hero power of stating the actions he will take against his enemies, then carrying them out in that specific order. He tells a cop the phone will ring with the military police to absolve him of being arrested and it happens. He tells a bad guy over the phone he’ll break certain parts of his body and then does just that. I’m pretty sure during the many times he orders food offscreen he specified similar instructions to fast food joints. If only Tom Cruise had this ability to spot a tired action movie script.

Jack Reacher: Never Go Back (a very fitting title) finds the titular hero, reprised by the action-ready Tom Cruise, wandering America in search of some butts to kick. The opening spends far more time talking about his stellar fighting skills than showing, but I guess you can’t kick butts everyday. Reacher decides to head on over to Washington D.C. to meet with Major Susan Turner (Cobie Smulders) who has been helping him solve cases across the country. When he arrives, however, Turner is being accused of murdering soldiers and Reacher is brought in for similar charges. To clear their names, they escape from a high-security government prison and go on the lamb to unravel the mystery behind the murders. And once they do, it’s nothing all that special of a secret operation.

One might think that Reacher and Turner would form a romance over this case, especially given the multiple scenes where they share a hotel room wearing very little. Unfortunately, there is not much chemistry between the two as their dialogue mostly boils down to cold exposition and flat quips. In comes the addition of teenage tagalong Samantha (Danika Yarosh), an airheaded girl who may or may not be Reacher’s daughter. Her purpose is to act as a clueless ditz that keeps the hired goons hot on their trail via her use of cell phones and stolen credit cards. She acts far too casually for a girl that lives a poor life and is constantly shot at by secret agents. Perhaps this is some old writer’s idea of trying to appeal to the youth market, what with their ungrateful attitudes and obsession over texting.

The movie certainly does deliver some well-paced action, but action that requires a heavier suspension of disbelief. Mainly, you have to overlook how most of Reacher’s actions go unnoticed by anyone who isn’t out to kill him. While on a plane to New Orleans, he takes out two goons following him; one in the bathroom and one in his seat. His punches to the face, kicks to the legs and smashing of faces into walls attracts zero attention from the passengers, even after the plane lands and passengers begin disembarking. This same logic must be applied to the sequences of a chase through the streets New Orleans and a fight that breaks out in a D.C. kitchen. Another commentary on how little attention society pays to the world outside their smart phones? Nope, just more silly thriller logic.

Never Go Back is based on one of the many Jack Reacher books that has received much praise, which makes me hope something big was lost in this theatrical adaptation. The dialogue, even with all the silly trimmings of political intrigue and violent insults, is some of the most amateur and atrocious I’ve heard of the genre. Lines such as “I’m the man you didn’t count on” should officially be retired from hero monologues. Show, don’t tell. Show us how effective Jack Reacher is at being a super soldier, don’t spend most of the movie talking about it. Considering how capable Tom Cruise is at skilled action stunts, he seriously shows his age in a picture where the most he’ll do is scale a roof and take a tumble off of it. I know he can do more, both in character and stunts. Leave this forgettable drivel to a lesser actor.