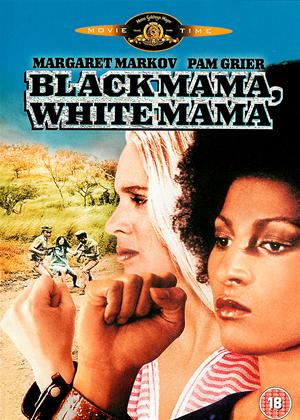 Synopsis:
A genre all by herself, Pam Grier tackles - and shackles - her sleekest role yet as a pair of women in chains and on the run in this colourful, outrageous and truly exciting action flick! Grier is Lee Daniels, a prostitute doing hard time in an island prison camp for women where the guards have a new way to punish inmates who fight: by cuffing 'em together! Chained to her bitter rival, while revolutionary Karen (Margaret Markov), Lee finds herself literally linked to the revolutionary cause - and on the fly - when Karen's guerrilla friends stage a coup! But this foxy inmate's got a cause of her own in the form of a secret stash of cold, hard cash and a getaway boat! Brawling with her white
counterpart over which way to go, and tracked by a dog by guards, guerillas and a gangster after the loot, she's gotta make her escape - before both mamas' enemies bring them down for good!
Actors:
Pam Grier, Margaret Markov, Sid Haig, Lynn Borden, Zaldy Zshornack, Laurie Burton, Eddie Garcia, Alona Alegre, Dindo Fernando, Vic Diaz, Wendy Green, Lotis Key, Alfonso Carvajal, Bruno Punzalan, Subas Herrero, Jess Ramos, Carpi Asturias, Andres Centenera, Bomber Moran
Directors:
Eddie Romero
Producers:
John Ashley, Eddie Romero
Writers:
H.R. Christian, Joe Viola, Jonathan Demme
Aka:
Chains of Hate
Studio:
MGM
Genres:
Action & Adventure, Drama, Thrillers

Embarrassed that I even rented this - Black Mama, White Mama review by RJ

Disclaimer: This review is based on the first 25 minutes of the film, which is how much I watched before turning it off.

This is not something I would normally rent. I'd recently watched The Defiant Ones and on the special features this film was mentioned as being a variation on the theme of that film and I frivolously chucked it on my rental list thinking it might be a bit of easy, undemanding fun. I was obviously aware that is it an 'exploitation' film, but having recently enjoyed Blacula and Scream Blacula Scream (the latter of which also starred Pam Grier), I thought this might be OK. I was wrong.

As I recall, despite being categorised in the 'blaxploitation' genre, the Blacula films weren't overly exploitative and they seemed to be made by filmmakers who were genuinely trying to make good films even whilst working within the confines of limited budgets and genre restrictions. But this is a pretty torrid and sordid affair. Set in a women's prison, it's only a few minutes before the prisoners are all naked, hosing each other down in the shower, whilst one of the guards (all of whom are apparently lesbians, naturally) peeps at them through a hole in the wall and masturbates. If my 15 year old self had stumbled across this on late night TV 20+ years ago I probably wouldn't have believed my luck - but my critical faculties have changed somewhat since then.

In between flimsy excuses for further female nudity you will find terrible acting, a silly plot and cheap, shabby filmmaking. I am not qualified to discuss the merits of the exploitation genre in great detail - I am sure that as in any genre there are good and bad examples. Arguments in defence of films like this usually run along the lines of saying that they provided an opportunity to portray strong women and/or people of colour which was not yet available in mainstream cinema. There might be something in this and, as I said, I don't know enough about the genre as a whole to comment with any authority - maybe films like these were a kind of stepping stone on the way to progress. Either way, I couldn't endure the exploitation aspect or the amateurish filmmaking for more than 25 minutes.