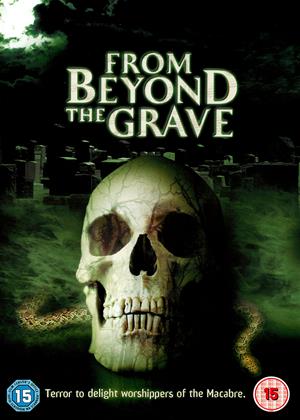 Reviews (1) of From Beyond the Grave

Milton Subotsky, who first pitched the idea of remaking Frankenstein and Dracula to Hammer films, was the man behind Amicus productions, who became Hammer’s main rivals during the 60’s and 70’s – occasionally eclipsing the success of the larger company.

Amicus made many anthology films whereby three or four short stories would be cradled by a framing device. For ‘Beyond the Grave’ (one of the better portmanteau productions), Peter Cushing plays a curious accented seedy antique shop proprietor. Each item he sells or is stolen has a story of its own …

The magnificent David Warner buys a mirror with demonic properties. The way his life is taken over by this magical object is very well conveyed, an inexorable slide into seediness and blood - plenty of blood.

Story three is comedic and has Ian Carmichael as the victim of an ‘Elemental’ which he hopes will be banished by dotty witch Margaret Leighton.

Finally, Ian Ogilvy buys a door that leads into another, horrific dimension. It bears too many similarities to the David Warner tale to provide a satisfying finale in its own right.

Apart from story three, I would say that all tales are let down by their respective endings. Often, the carefully constructed build-up of atmosphere and dread is completely undone by the obligatory ‘twist’ which renders events ridiculous. The story featuring Donald Pleasance and his daughter as a truly sinister duo is trounced, for example, by the revelation, that they are professional problem solvers.

The framing narrative comes to end with a prospective thief (Ben Howard) wishing he had picked another shop to rob when Cushing’s unnamed proprietor causes his demise. Clearly, the shop owner is more than human.