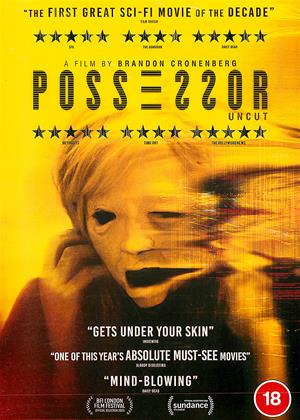 If you can’t sleep, this’ll do the job - Possessor review by Alphaville

Apart from a few pointlessly bloody scenes, this grossly overrated film is mostly a glacially slow mood piece that takes real determination to get through. Andrea Riseborough’s mind is transferred into Christopher Abbott’s body to make him murder someone… which means that as soon as we’re getting to know one character, she goes off screen in favour of another, destroying any empathy and interest built up (admittedly minimal in the first place). A montage of flashing images is used from time to time to indicate her troubled mind. It’s something to do with a corporate takeover (yawn, yawn).

With a more proficient director at the helm the premise might still work. But over-deliberate camerawork, subdued acting, one-paced exposition and a score so soporific it could be marketed as a sleep inducer make it difficult to keep off the Fast Forward button.

Sci-fi films should at least be stimulating, for goodness sake. For an exhilarating film in a similar vein, take Upgrade, for instance.

Awful film. How they get backing for these kind of projects beats me. If you enjoyed Compulsion (urrgghh) you'd probably like this. Utter snorefest with gratuitous bloody violence thrown in just to keep you awake ("Why didn't you use the pistol instead of the knife?" "Knife seemed more appropriate" lol). The lead actress/actor (are you allowed to say actress?) reminded me of Neil Robertson the snooker player. I don't know maybe my expectations are too high but this is just one of a series of recent films which have just been terrible. Avoid.

Liked this film's plot and loved the feel of how the film was shot - featuring some great locations in Toronto. Brilliant performances by essentially all of the actors. It was an incredibly gory, violent and gruesome film, though, so be prepared for that. Recommended!

Assassin with an agenda - Possessor review by RP

An assassin can have their brainwaves transferred into the inner circle of those that are to be killed. The only way back is for them to die themselves. Seems simple enough. But when something goes wrong and the assassin has problems finishing the task we have a whole plethora of confused identity. There is a nice twist and the plot is well acted with plenty of well known actors playing their parts convincingly. At times we have a Hammer House Of Horror amount of blood and gore but for all that I enjoyed the film. Good twist and plenty of questions about identity and what it means. Next time I raid the chocolate and biscuits I will know it isn't really me. I have been taken over.

There was some interesting symbolism with the red butterfly that the assassin killed and mounted as a child, and the overhead view of a blood pattern formed by two corpses.

The general idea of an assassin using another body to kill, was seen in Michael Reeves' 1966 horror, THE SORCERERS, where an old couple get their kicks by experiencing sensations through a younger person. Cronenberg is aware of this as you can clearly see a book with the title of "The Sorcerers" on a bedside table.

Brandon Cronenberg, the son of David Cronenberg, is an apple that certainly hasn’t fallen far from the tree. Possessor is as much a psychological horror of the loss of identity as it is a grotesque display of horrific violence and cerebral erotica. It’s an echo of Cronenberg’s penchant for surreal body horror but feels as though it’s taking those graphic elements to a new degree, embracing a more piercing edge of the grizzly than David’s usual psychosexual explorations.

Brandon throws us straight into the premise with only a few bits of hand-held exposition from the masterminds behind the operations. Tasya Vos (Andrea Riseborough) works as a spy of sorts. But rather than try to match the look of the person she’ll be impersonating, she takes the whole body of the part she plays. Vos works for a corporate organization as an assassin that utilizes a sci-fi device that allows her to take on the body of someone and commit the murder she needs to carry out. She kills her target, messages her scientist co-workers to pull her out, and kills the host. It’s an efficient way of carrying out corporate kills for the company but may be a different deal for Vos.

Given that the machinery used for Vos’s many brain transfers looks fairly retro, there’s concern that it may degrade her mind. She is given several tests after each mission to ensure she still has a functioning memory. When not on the clock, her life seems dreary. She’s divorced from her husband who she no longer loves, despite him being very welcoming of her back into his home. She has a son but doesn’t feel present for him. She would much rather be working, if only to feel something for the unconventional stim she gets from the experience.

Vos is tasked with her toughest mission yet when embodying the body of Colin Tate (Christopher Abbott). She learns all she can about her host, that he’s a low-level employee at a corporation for scanning people’s webcams, having attained the job from her wife’s wealthy father. Through Colin, Vos learns to become accustom and comfortable with the body. Perhaps even too comfy, as when she gets to into the sex with Colin’s wife, imagining herself with a penis. The comfort may prove to be her downfall as she soon discovers she has less control over the mission than she thought.

There’s a lot of surreal Cronenberg hallmarks present in the twisty nature of this tale. There’s that brilliantly layered moment where Vos inside Colin takes on his job of spying on other people, including those having sex. Vos is also revealed to be quite unstable as she starts seeing flashes of time that bend the reality of her own host, seeing water and matter flowing backwards. A constant questioning echoes throughout the film of just how much Vos may be losing herself and her identity within her work. This aspect is given the most chilling of reveals where Colin takes hold of his own body and also peers into the memories of Vos. And true to the spy formula, both Vos and Colin are unsure who they can trust, both inside and outside their respective organizations.

Having watched the uncut version, Possessor is absolutely not for the faint of heart. There’s some incredibly graphic sex scenes and grotesque close-ups of teeth and eyes being forced out of bodies. Shots linger on long enough so that the audience is thoroughly disgusted with Vos and her work, where stabbings last for nearly a minute and blood paints floors. Those willing to take the ride, however, will be greatly rewarded with a visually stunning picture of creepy implications about how precious are subconscious can be, especially if it’s a part of your own profession.