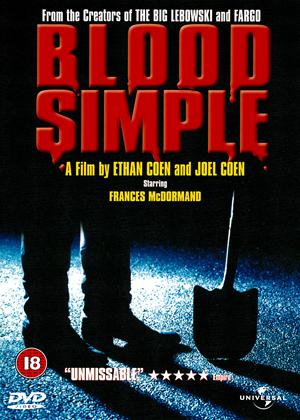 This film has a no frills feel about it with some scenes having a cult type feel about them. It's not gripping but nevertheless hold the attention right to the dramatic climax.

If you want to have a real cinematic treat, watch this, and then Shallow Grave and/or Fargo: you will see that Fargo is essentially a bigger budget remake of this, and Shallow Grave (directed but not written by Danny Boyle, and still his best film, I think - way better than the tedious Trainspotting or the sentimental wallowing of Slumdog) lifted so much from it. Some scenes (light shining through bullet holes)were 'taken' directly from here for Shallow Grave.

The best thing about this film is the script: tight, terse, pithy and funny. Some great lines.

It has a plot to die for (literally!).

The weak things about this movie?

And the music - much of it hispanic - is awful. Also, the black barman character was an unnecessary distraction, included probably for the interesting contrast between a Detroit Motown-loving outsider black man in Countrya nd Western territory.

But really, still 4.5 stars, despite the creaky bits!