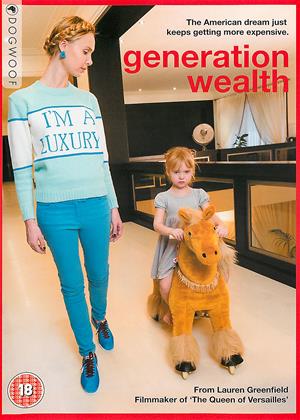 Sure, the same message of the many talking head interviews are the same theme, that money can’t buy you happiness. But its a message worth repeating. If we don’t take heed of our actions in trying to secure fame and fortune, we drain our souls. Generation Wealth aims to prove this point in its many true-life horror stories about how the obsession with wealth has damaged many, to the point where many realize the damage is done.

Director Lauren Greenfield, unfortunately, decides to take a very personal route with this picture, highlighting her own struggles which don’t look as burdensome. She talks about how before this documentary was approved, she had a baby and questioned if she should be traveling and working so soon after pregnancy. While she does try to tie this in with motherhood perils of seeking the most money, her additions ultimately come off more like a blog better serviced for a behind the scenes featurette. Yes, I’m sure it was difficult being away from your newborn for so long and that you had to pump gallons upon gallons of breastmilk to freeze but let’s stay on point here.

A number of interviews are conducted with people who grew up going giddy with money, trying to trace where things started going wrong. The most heart-wrenching of stories are the ones where the body becomes a product. Tales are told of one woman’s struggle to maintain a beauty standard that led to plastic surgery, which drained her of her accounts and sending her frazzled that so much was invested in something that took away a part of her. A more intriguing story features two women; one wealthy enough to spend truckloads of cash to finally have a child with someone else’s egg and the not-so-rich donor who agreed to have her baby. Her reason: she wanted a bigger house.

Family certainly plays the biggest role as one exceptionally wealthy man practically screams his message about how money can’t buy him the smile of his daughter or the love of his wife. More disturbing tales are told of how the poor tossed their ethics aside to make a lot of cash fast. Not merely regulated to prostitutes, this also extends to very young kids from small communities. A mother signs her little girl up for the glamour reality show of Toddlers & Tiara because why not? She lives in a town of 500 and doesn’t have as much of a shot at fame and fortune. So why not push her daughter in a fashion show? It’s only later she realizes the obscenity of having her little girl in a Vegas showgirl outfit and how her daughter’s ultimate goal is money; not for any specific purpose other than to spend and kiss.

Then there are the more depressing stories of making bad calls in parenting. One man with a very rocky history of troubled financial choices rather oddly about how he spent way too much on vacations, made poor choices that led to him fleeing to Columbia, and literally paid for his sons to get laid. He will later speak a little more tenderly about how he has damaged his life but still with a titter of ease. You’ll notice that the richer the individual, the more ease they have with speaking about the choices they made. The model struggling to make payments for surgery and fashion speaks less eloquently than the elite tycoon or upscale New Yorker living in a suite. The richer plights come off more melodramatic than the ones tricked by fame rather than born into it.

One interview had me pondering, where a rich man nearly screams that anyone who thinks life is easier with a lot of money has never had a lot of money. But I couldn’t help but think of the many that would want to use that money for stuff they need; doctor bills, home payments, a reliable car to get a reliable job, medicine, food for your family. This struggling aspect seems strangely absent in Greenfield’s film that only targets those that rose and fell with riches, be it financially or mentally. And in the film’s blur of trying to decipher where this all stemmed, from the classic vision of the American dream to Donald Trump’s America, not as much seems to be said of the corrupted minds of the wealthy, only coming off as a smattering of observations that are intriguing but never building.