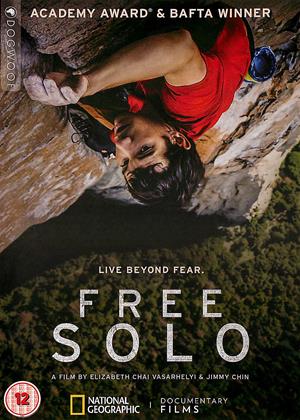 Synopsis:
From award-winning documentary filmmaker E. Chai Vasarhelyi and world-renowned photographer and mountaineer Jimmy Chin, the directors of 'Meru', comes 'Free Solo' a stunning, intimate and unflinching portrait of free soloist climber Alex Honnold, as he prepares to achieve his lifelong dream: climbing the face of the world's most famous rock...the 3,200-foot El Capitan in Yosemite National Park...without a rope. Celebrated as one of the greatest athletic feats of any kind, Honnold's climb set the ultimate standard: perfection or death. Succeeding in this challenge places his story in the annals of human achievement.
'Free Solo' is an edge-of-your seat thriller and an inspiring portrait of an athlete who challenges both his body and his beliefs on a quest to triumph over the impossible, revealing the personal toll of excellence. The result is a triumph of the human spirit that represents what The New York Times calls "a miraculous opportunity for the rest of us to experience the human sublime".
Actors:
Dierdre Wolownick, Tommy Caldwell, Jimmy Chin, Alex Honnold, Sanni McCandless, Elizabeth Chai Vasarhelyi
Directors:
Jimmy Chin, Elizabeth Chai Vasarhelyi
Producers:
Jimmy Chin, James Cutting, Shannon Dill, Evan Hayes, Elizabeth Chai Vasarhelyi
Others:
Elizabeth Chai Vasarhelyi, Evan Hayes, Shannon Dill
Studio:
Dogwoof
Genres:
Documentary, Special Interest, Sports & Sport Films
Awards:

Im not into rock climbing or any sports and still found this a great watch.

Its made really well. Very clever, similar to a film with Lots of really tense parts. Sitting on edge of seat moments.

Interesting to see how a relationship works with this type of living on the edge job/sport.

You watch it in dispalef that someone can or would do this.

Ill recommend it to any and everyone!

Documentary exploring the motivation of Alex Hannold, determined to achieve his dream of accomplishing the free solo climb to the summit of El Capitan. Breathtaking with intense, nail-biting moments; the cinematography is awe-inspiring. You keep wondering what possesses anyone to dare to try this incredible, death-defying feat. It gives a real insight into the life of Alex, who difficult it is for him to reconcile relationships with his lifestyle and aspirations. The scenes with his girlfriend feel intimate moving. I strongly recommend whether you like climbing or not.

Breathtaking - both visually, and philosophically - Free Solo review by Champ

This film is seared on my mind, weeks after watching it. While I had the disk, I just had to watch it twice.

I've done a tiny amount of climbing, just enough to know I'd never remotely consider doing free climbing. But I also do other 'dangerous' activities, where my confidence and competence allows me to think that I have mitigated the risks, and am safely 'in control'. Consequently, the issues faced in the film spoke to me very directly.

The first reaction is that Alex has a death wish, or just doesn't care if he lives or dies. But then you get to know him, and realise he is an intelligent rational human being. And then your brain refuses to accept this - he sounds like a rational guy....but he's doing *that*!

By the end my brain wasn't able to square this circle, but I was just left in awe of what humans (some humans...) are capable of.

Watch this, and blow your mind

These guys seem nuts but a brain scan of Alex the guy about to try to scale America's most difficult climb without ropes, just fingers, chalk and feet, gives a strong clue as to why some people (usually men) can only find excitement going to the edge. Not for them getting worked up watching a football game. The excitement is generated because they may fail once and die and plenty of these risk takers have died. It isn't a career choice with a guaranteed pension!

You are with Alex all the way as his preparations sometimes miss-fire and those around him (similar guys, but not friends; it doesn't do to have an emotional connection when a friend may die any time) comment to viewers that now he has a girlfriend living in his caravan as he tours around, he has a distraction. Will she be the death of him?

The views of the climb he is to make and close up camera coverage as he attempts it, a distraction to be sure, are spellbinding and frightening in equal measure.

On the one hand you cannot help admiring these people but also feel that there is no way the risks could be worth it. However, they cannot live without it, but they may die all the same. Exciting and recommended.

Loved the film so much bought the disc and have watched a few times, what a man, what a climb, and what a great real story.

Astonishing but difficult to relate to - Free Solo review by AER

Alex Donnard knows why he was put on Earth, and to the expense of all else, he does all he can to uphold and facilitate that need. Hold up - rewind - he has set up a trust to help benefit those in need of tech in the third world. To do what he does is hard to understand, we can be awed by his achievement but what introspection there is is limited. Like a lot of athletes, it's about what they do and not what they say, so this one was a hard nut to crack. An interesting watch from a sporting achievements POV but no great shakes on the human front.