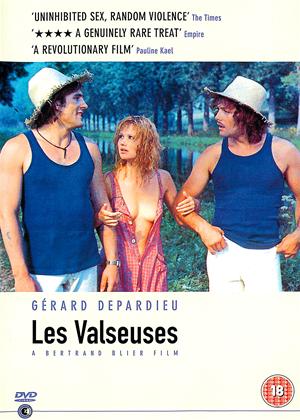 This was the first film Depardieu was in and it made him a star in France. The film was a big hit in 1974 and although it feels somewhat dated today it still has a cult following. The film is absurd and outrageous at times and certainly not politically correct. The way the film represents women is questionable and as a woman I found this film uncomfortable to watch at times. But overall I think I found Blier's blatant attempts to shock a bit tiresome really.

Shocking by today's standards, but with a certain charm. - Going Places review by CP Customer

While it is very much a product of its time, I have to agree with another reviewer about the level of misogyny and violence against women in this film. At first it seemed mildly amusing with the characters of Jean-Claude and Pierrot as likeable rogues who steal what they want and have sex with who they want and within the context of the film it was somewhat justifiable, but halfway through the film it started to made me feel fairly uncomfortable. Despite the uncomfortable aspects of the film it's extremely watchable and strangely has a certain charm about it.

Films of the 1970s often explore the theme of the anti-hero. But the anti-hero film needs some interest in the characters, some purpose. Not in this film. It's a horrible tale of arbitrary criminal activity, sexual harassment and violence. It's completely unredeemed and nothing is learned. It enjoys the humiliation and degradation of women. Avoid.

This film is just deadly dull - it is far too dull to be offensive, other than to those desperately looking to be offended, or so conditioned by our politically correct age that they cannot see the contradiction in being offended by this, but not offended by a movie showing leery women exploiting men (no doubt some would see that as 'liberating' and portraying 'strong women'). Well, you can't have it both ways, sisters! (Unless feminists are hypocrites, of course).

Anyway, the problem with this film is that it essentially has no plot - two likely lads hassle women for sex and engage in petty theft on an early 70s road trip across France (but really, it is not as exciting as it sounds).

Possibly the second half of this movie is brilliant - but we lost patience after 40 minutes and simply could not stand any more! It felt as though we'd watched 5 hours of tedium after half an hour, so just couldn't take the second half. If it's as bad as the first though, this is one star - and evidence that the French are different if this was a huge hit in 1974. With whom? Who could possibly enjoy this drivel?