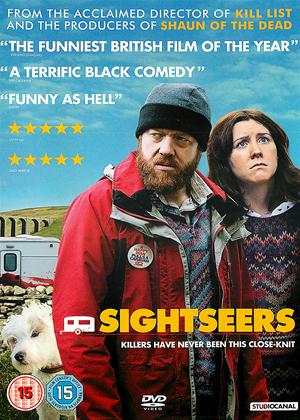 Definitely not a romantic comedy - Sightseers review by hF

Billed as a romance and with a write-up implying quirky humour (and including some of my favourite locations such as the Crich tramway museum) I thought this sounded like a pleasant film about an odd couple caravanning. How wrong could I be?

Gratuitous extremely irrelevant violence - presented in an almost subtle way that initially made it feel funny but as it descended into a tale of psychopathic mayhem to laugh felt like colluding with a deeply humiliating situation. No sympathetic treatment of human frailties. Should be at least an 18 and have a write-up that tells the truth.

I cannot think who I could recommend this to. I only kept watching it hoping it would all turn out to be a dream or have an ending that explained the film, but it didn't.

Funny comedy for those not easily offended. - Sightseers review by Steve Mason

Black character comedy in the style of Mike Leigh. Quite funny, though I can imagine some may find its casual violence offensive. A dull caravaner dispenses sudden, brutal justice against the trivial thoughtlessness he encounters; his lonely, pliant girlfriend joins him, in a desire to be whatever it takes to keep him.

Travels close to the intolerance and anger and bitter humour at the heart of the UK. And the beauty of its countryside.

I love a good, dark comedy - unfortunately, most play it safe and appear to be fearful of truly creating a demented anti-hero with a deeply sick sense of their own importance. Not so with Sightseers.

This nightmare couple excel in taking a scarily recognisable sense of self-righteous ego overload to the extreme. I have met people a few steps short of this pair who, fortunately, still have their (for want of a psychoanalytical phrase) superego intact. This sociopathic tale still maintains a warped charm(?) with a less expected turn of events regarding just who is the worst protagonist ultimately.

It could be described as a 'romp', but it's too dark for that; one of those films I loved to watch, sort of, but will probably not watch again...not because I didn't like it!

You won't see many like this one! - Sightseers review by RP

A bizarre low budget Brit comedy serial killer film - you won't see many like this one!

Dodgy caravan enthusiast Chris collects his new girlfriend Tina (whose Jack Russell terrier has just died in a bizarre knitting accident) from her over possessive mother and takes her off on a round-Britain caravan holiday. But normal, boring Chris is really a demented serial killer who casually bumps off those who annoy him. And soon Tina joins in - and becomes the stronger character.

This really is great stuff: if you like black comedy with a few rude (but amusing) bits thrown in, you'll laugh out loud at this - I certainly did. Combine that with some beautiful scenery that I know well (including the Peak District, the Lake District - Buttermere, Honister Pass, Honister slate mine) and with a dénouement on the Ribblehead viaduct and the result is an eccentric film that is surely destined to become a cult classic.

This monster from the Midlands is horribly good. The humour is so black as to have layers of badness. It makes Seven Psychopaths look mainstream. Some of the blackness is just casual violence, some is a parody of Hindly/Bradey, some is pitiful/sad. I had not seen either of the main characters before who were born for their roles. If you are up for some sophisticated slap stick this is brilliant.

One of the best films I have seen for many years. Original, different, funny, engaging, hilarious, and engaging. One of the best English road movies ever. Must see. Five stars.

This is a disturbingly dark comedy but has great originality with its brutal content that feels odd but also perfectly fitting in what becomes a completely bonkers serial killer romance.

With a start so washed out and down beat I thought I was watching a Mike Leigh film Sightseers is a British black comedy about a couple whose first trip away together turns into a bizarre killing spree.

The film begins with Tina at home with her mother who is grieving audibly for their dearly departed dog, Poppy, who has died in some kind of accident that she holds Tina responsible for. Soon Chris, Tina’s new beau, arrives and the two head off on a caravan holiday of England, much against her mother’s wishes.

However a second accident in which the couple kill an irritating tourist causes Chris to realise that he can bump off anyone who annoys him and from there the two travel the country, killing and making love.

A weirdly muted Bonnie and Clyde style story Sightseers has some really great moments to it, the performances are very good whilst the story, though a little slow in places, in certainly an unusual one. The comparison to the aforementioned bank robbing anti-heroes ends very swiftly however as combined Tina and Chris have about as much charisma as an old teabag; yet this is part of what makes their little story so strangely enjoyable. You don’t particularly like the characters yet through their deeds you begin to understand them and see them fulfilling long ignored desires and needs.

Unfortunately however there isn’t quite enough clout to the story to keep it going all the way through – despite the film’s short runtime there’s a notable sag in the middle – whilst the various kills roll slowly towards the climax rather than building tension as they occur. All in all Sightseers is certainly different and in this it is quite refreshing, however it’s just not quite enough to really hit its target.