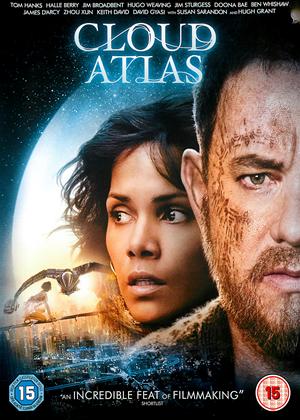 There are reviews which tell you the story line so I won't bother to do that again. It is a mammoth undertaking to watch as the film meanders through time with six stories connected, not because the same cast are in each story, but by the purpose of the film which I didn't get until about the last 30 minutes (not having read the book or the synopsis). Halle Berry says it all about then "Why are we continually making the same mistakes?". It's about people speaking out for their beliefs, fighting against oppression etc. pretty much what is going on now. It has a strong message and suggests it won't be resolved for the next few centuries.

Much like other reviewers I didn't like the film. I was able to follow the 6 stories but only because I had just read the book, my wife, who hasn't read it gave up after an hour or so. The issue is mainly the editing: trying to lead the 6 stories in parallel, at the same time just doesn't work. It was nice at times to be able to make connections between them but the end result is a mishmash.

Whilst I thought the acting was good, the idea of using the same actors for different parts in different stories makes it even more difficult to follow.

Although this is a very long film, the directors made the choice to cut an awful lot of good elements of the book and for what? replacing them with pointless action scenes. The stories that suffer most from this process are that of Sonmi and Robert Frobisher, missing out some crucial pointers.

When reading the book, I thought the mise en abyme didn't work that well, particularly with the outermost stories because I found it hard to remember the characters and where the action had stopped. However it was still better than having a soap-opera style structure jumping from story to story randomly.

At best he result can be described as salami slicing.

Are some books simply not meant to be filmed ?? - Cloud Atlas review by Rod

I enjoyed the book a couple of years ago - it was chunked to set out a series of different stories sequenced through time with a definite, detectable but tenuous thread between them. With the film, I was anticipating a clever, intriguing story-line that would envision for me pretty much what the book chapters would "look like", with the interpretation of the futuristic episodes most interesting of all..... I was disappointed after about 20 minutes

So, the chopping of sequences was rapid-fire and seemed quite unlike the book. And, apart from the different characters' comet-shaped birthmark [ big deal! ], I didn't detect a strong-enough link between the stories. I persevered for about 90 minutes then hit fast-forward for much of the rest of the film. With the continual darting backward and forward in time, I would have much preferred one story at a time. Then about the futuristic peasant-speak ( I assume these folk were 'peasants') I wondered whether sub-titles would have helped, but then it might have looked word-for-word just the same (sorry guys, a bit flippant there). All in all a clever book, but a translation to film that seemed too turgid and 'worthy' for its own good.

Maybe, as said by another reviewer, some books are best left to the imagination and thus unfilmed ! But... I will now read the book again ... and hire the film again in say 6 months time....

The book was way overrated so I came into the film hoping that they would do something with the ideas in the book. I was so wrong. The narrative is all over the place and if I had not read the book I would not have known what was going on. Only the Timothy Cavendish story is done justice in the film. I felt was woefully miscast (Tom Hanks' oirish accent is a low point of the film) and the multiple casting of the various actors didnt work. The film tries very hard to be deep and meaningful perhaps too hard and the overall result makes for a mess of a film.

After watching this 2 hour 45 minute movie for the first hour of its run I was asked "Are you as bored as I am and have you got a clue yet as to what this is all about?" by 'she who is to be obeyed.' My reply after trying to work out what the hell it was all about was "Hell yes I'm bored and no I haven't worked out what it's all about yet."

Actors and actresses with the talent of those used in this production have been sorely let down by those who employed them.

As has been shown in this outing, movie makers can over complicate movies which then subsequently puts off their audience and makes them more weary of what the movie maker may off them in the future.

This was a book/story that should never been considered for the big screen, but left in the imagination of its readers...................

A sprawling, ambitious piece of film making that weaves together six storylines set across many centuries - and indeed, as the ending shows, space as well.

With a stellar cast appearing with different makeup and playing different roles in each of the six stories, only superb directing could make this work. And it has those skills applied to it in an unusual arrangement with three directors: Tom Twyker and Andy and Lana Wachowksi.

This is a complex, lengthy (2¾ hours) project - so is it a cinematic masterpiece, a superb philosophical drama, a masterful adaptation of an extremely complex novel, or is it a turgid, pretentious, bum-numbingly long piece of over-ripe tripe?

I watched it first about 6 months ago and was impressed by its scope and scale, and now I've watched it a second time. And I'm still not sure - I may even have to watch it a third time...

It is difficult to describe the overall scope of the film, but to give a flavour here are the main storylines: (1) The 17th century experiences of Adam Ewing on a voyage to the S Pacific islands. (2) The story of Robert Frobisher, a bisexual composer of classical music in the 1930s (3) Set in the 1970s, the tale of journalist Louisa Rey who uncovers a conspiracy by Big Oil to allow a disaster at a nuclear power plant (4) Set in the present, Timothy Cavendish is held prisoner in a nursing home - but escapes (5) Set in a futuristic 22nd century Seoul, Korea, Somni-451 is a fabricant, a clone used for menial work. She becomes enlightened, part of a rebellion, and broadcasts a manifesto. (6) Set in a post-apocalyptic Hawaii, Meronym, a woman from a tribe with some remnants of technology is guided by Zachry to a mountain top observatory to broadcast a signal to the off-world colonies.

Err, that's it - and each of these stories and characters interacts with each other. Perhaps the most telling of these is in (6) where Somni is revered as a goddess. Segments of each story are cut and mixed together so that there are abrupt jumps from one to another. Strangely, this isn't confusing and once you've got it in your head which story is which (and that's why a second viewing is helpful) it seems to work quite well.

Unfortunately I find Tom Hanks to be a 'wooden' actor, so the fact that he plays a main lead (there is no single 'lead' here) gave me an immediate problem, a problem that I also have with Halle Berry who I generally find to be an unconvincing actress. And unfortunately the fact that they spend much time talking to each other in (6) in a simplistic pidgin English does nothing to help matters.

The film is bookended by Tom Hanks reading stories (in pidgin English, of course) to his grandchildren, presumably the stories of the film.

There are elements of humour - the 'cat incident' (you'll recognise it when you see it) made me laugh out loud. There is drama, sci-fi and fantasy. I'm impressed by the scope, by the music, by the cinematography - but I found the philosophy, while somewhat beguiling, to be simplistic and the whole film became, by virtue of its length, turgid.

I will definitely try to find the time to view it again, but at the moment I'll give it 3/5 stars. It's one of those films you'll probably either love or hate - and at the moment I'm sitting firmly on the fence...

Based on the award winning novel of the same name, which it in itself seems to have been inspired by various earlier literary greats, including Do Androids Dream of Electric Sheep (which many will known as the on screen adaptation Blade Runner) and Virginia Wolff’s Orlando, which too was adapted for the screen by Sally Potter.

Cloud Atlas however is a quasi-science fiction exploration of freedom and relationships, with several overlapping and yet seemingly unlinked storylines it uses the recurrence of the same actors in various roles to depict the way in which the actions and relationships of individuals have an impact upon the lives of others, even far into the distant future.

With a cast full of famous faces from both sides of the Atlantic Cloud Atlas could never be condemned for a lack of ability, whilst it’s directors have a real range of titles under the belt that suit the various themes of the film. These elements, along with the sparse but effective soundtrack, ensure that the individual stories are all very well accomplished, each telling its tale with the right amount of tension, drama and characterization.

The problem however comes when one tries to piece the individual stories together, like pieces of a second hand puzzle, without all its bits and pieces of sky from another box all together, the stories struggle to blend right up until the film’s final quarter. When they do fall into place however they fit in a really innovative and interesting fashion – don’t expect clean lines however, some of the connections are incredibly tenuous. My only qualm in this respect is the story of publisher Timothy Cavendish, whose brief stint in a retirement home seems like misguided light relief rather than contributing anything to the story itself.

This is a complete shame because the other aspects of the story are both heavily detailed and deep. This leads me to the films other flaw, its length, at a hefty 172 minutes there were several points at which I began to loose all faith of ever leaving my seat. A viscous edit, removing all the Cavendish nonsense, is very much in order – easily killing two birds with one stone.

All in all I thought Cloud Atlas was an interesting story, and watching the film certainly made me more intrigued about the novel, its foibles however were such that by the end of I was somewhat glad it was over.