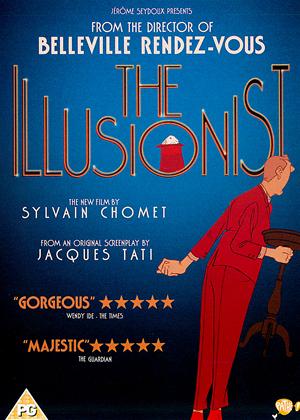 Reviews (2) of The Illusionist

Charming film with superb animation - The Illusionist review by RP

Although the story is very slight (and perhaps that's why Jaques Tati himself never developed it further) this is a charming film. The animation is superb – and the look and feel is entirely different to the CGI laden animated films from, for example, Disney or Pixar. In fact, it is the animation which is the true star of the film and gives an authentic late 1950s feel to the whole production. 4/5 stars – highly recommended.

A Travesty of Tati - The Illusionist review by Alphaville

Director Sylvain Chomet’s supposed animated homage to Jacques Tati is a travesty. Unlike many comedians, Tati understood the visual nature of cinema. As an actor he was a wonderful visual performer and as a director he filled his films with artfully visual gags. Animation has the capacity to expand and enhance reality but Chomet completely fails to understand this. The Illusionist diminishes both Tati and the medium. Chomet likes to hem in the frame and destroy all sense of wonder. Some scenes even place the Tati character on a stage, forcing us to watch animated theatre. The film deserves one star for a wonderfully intricate final aerial shot, which spirals out from Arthur’s Seat, the hill in the centre of Edinburgh, to encompass the whole city. This shot was tellingly sub-contracted out of the director’s hands.

It’s a crying shame because hand-drawn animation has the power to transport, as with Ghibli films. The blame lies entirely with Chomet, who describes his film as intentionally ‘anti-cinema’. Unbelievable. Watch and weep or enjoy M. Hulot’s Holiday again instead.

The Illusionist is a French animation movie directed by Sylvain Chomet. The original script for the movie is written by acclaimed French director Jacques Tati. The script was written well before Tati’s death in 1982 but it became a movie adoption only in 2010. The realistic storyline follows the life an out of work illusionist and his new admirer.

A struggling illusionist living in Paris is forced to leave the city when his employment opportunities dry up. He meets a young girl named Alice in Scotland and gives her a gift. Alice believes that the illusionist’s supernatural powers are real and follows him in his travel.

He struggles hard to give new gifts to Alice and undertakes various other jobs to buy them. The movie depicts the affection of the illusionist towards Alice is a great way.

The movie’s portrayal of the struggling illusionist is quite amazing. The movie is certainly not targeted at younger audience as certain aspects of the movie can be understood only grown up people. The financial struggle of the illusionist, his new young admirer, other fading artists and the modern competition from pop singers are all depicted without any flaw.

The stunning visuals help in narrating the story perfectly. However, there are no great special effects that we normally watch in other animation films. The simple, yet powerful, visuals are a great advantage in this kind of narration. Limited usage of dialogues is another good thing that deserves mention. Most of the film’s story is depicted visually with limited dialogues. If you love melancholic drama, ‘The Illusionist’ is one great movie that you certainly don’t want to miss.