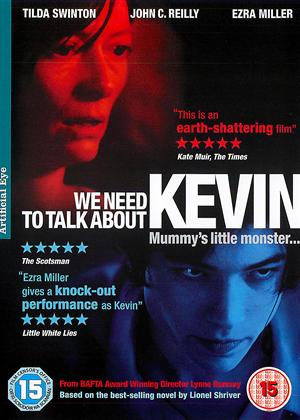 Rent other films like We Need to Talk About Kevin

Reviews (7) of We Need to Talk About Kevin

Disturbing, unsettling, haunting, creepy, harrowing, superbly acted yet ultimately manipulative. I guess that describes both the destructive character of Kevin – and perhaps also the film. The story is told through the eyes of Kevin's mother, Eva Khatchadourian (superbly played by Tilda Swinton), formerly a successful travel writer but who can only find clerical work in a travel agency. Eva is hated and shunned by the community and it is clear that some terrible event has occurred. The grim story unfolds through flashbacks from before and after 'the incident'. Kevin's conception and birth has echoes of 'Rosemary's Baby' and Eva is ambivalent towards him, doesn't hold him close, doesn't bond with him, perhaps doesn't love him; in turn Kevin is rebellious and spiteful, even from a very early age. Is it nature or nurture? The only time he becomes animated is when read the story of Robin Hood, after which he becomes obsessed with archery... He sees his baby sister as a rival and treats her cruelly. Kevin is not your average nice boy. The film ends with Eva visiting Kevin in prison, ending on a nicely ambiguous note. This really is a superb film and while it has won many awards it missed out on the majors, and in my opinion (and of Dr Mark Kermode!) was cruelly overlooked for the Oscar nominations. Highly recommended – 5/5 stars.

Well-acted and made movie. - We Need to Talk About Kevin review by PV

I really liked this film - it's entertaining, sometimes shocking and a bit disturbing perhaps. It's well-written and acted, for sure, and not too long like many movies (maybe because the writers, director some producers are British). But the director's flipping around to flashbacks at the beginning didn't do it for me - it was confusing and a bit pretentious too. Unnecessary. Reminded me of the kind of pretentious French New Age twaddle that students get taught to admire at film school. A film, like a novel, needs a timeline - one or two flashbacks are fine. But this movie had scenes from around 5 or more different times happening in seemingly random order. Now, the book.............. The novel was based on true stories of high-school massacres - and it shows. The author's trick was to listen to, watch and read about real cases then make a 'fictional' book from them. The only major thing changed from real life was how the son killed his victims (no spoiler here though). In the USA, where most states allow most people to buy and carry guns, a killer would surely choose a gun, non? So that was unrealistic, I thought, though interesting. Also, the demonic son storyline is an archetype - as in The Omen and many other films and stories. And don't they have social services in America? In the UK, this family surely would have got support. In the US, the Oprah-fied land of counselling, self-analysis and therapy, surely a family like this would have regular shrink sessions - just like all their neighbours. BUT, having said all that, I consider it a really good movie so award it 4 and a half stars, rounded up to 5.

Kevin - We Need to Talk About Kevin review by PH

The category 'really liked it' doesn't fit the experience. Awful but very good and stays in the memory, Excellent acting, particularly from 'Kevin'

Cartoonish nonsense - We Need to Talk About Kevin review by MonsieurK

One wouldn't expect great subtlety from anything derived from Lionel Shriver's silly novel, but the crudity of this film is really remarkable. There's barely a single believable scene in the entire thing, as two ludicrously mismatched adults (he's an obtuse dimwit and she's an ex-"adventurer", we're supposed to believe - which just seems to mean that she's written some guidebooks) struggle to deal with a child who is borderline satanic virtually from the outset. Virtually their only attempt to address their son's behaviour is to consult a doctor whose perfunctory examination of the boy is every bit as absurd as the parents' inability to discuss the situation. Every single character is a badly drawn cartoon (the mother's lumpen workmates are a particularly ridiculous gang of caricatures), and the splashes of blood-red that appear as a visual motif throughout the film epitomise the heavy-handedness of the whole enterprise. I very much liked Lynne Ramsay's early films, but this is utterly woeful.

Unsure about this one. I feel I ought to watch it again but I can't be bothered. I am never enamoured with Tilda Swinton's acting style but can appreciate she was good in this. Overall, I found the movie a depressing experience

A bit art house in style at the beginning, slow and confusing, as it constantly jumps about the timeline. However, it is worth sticking with, once it settles down after about 20 minutes it proves to be a very engaging, though quite harrowing watch. Excellent acting from Tilda and the various actors playing Kevin, even the young ones. Any negative reviews for this will be from those that didn't get through the first 20 minutes. I fail to see how anyone could rate this poorly having watched the entire film.

Good, but stick to the book - We Need to Talk About Kevin review by CP Customer

I think Tilda Swinton's acting in this film was exceptional, as was that of the various children playing her son. However, there was far too much jumping around from time to time and if I hadn't read the book, I would have really struggled to know what was going on in some scenes. The book, based on letters written by Eva (Swinton) to her husband is far more moving, deep and hard hitting.

Based on the novel by Lionel Shriver Lynne Ramsay’s We Need to Talk about Kevin is the painful and moving story of parents Eva (Tilda Swinton) and Franklin (John C. Reilly) whose son goes on a high school killing spree and their confused feelings of grief and guilt.

In many ways the movie seems far from the original American story in which Eva, a wife and mother, writes letters to her husband as the plot jumps back and forth in time. The movie continues to use the disjointed linear time frame, but does so in a very different yet equally effectively manner; manipulating the timeline has a very potent impact upon on the emotional structure of the movie: the linear manipulation helps to convey the pain and confusion felt by Kevin’s mourning parents.

Obviously this is not an easy film, with a rather risky subject and very complex emotions, yet the cast, particularly Swinton, really bring it to life with a genuine sense of humanity, pain and helplessness.

The first hour of the movie is daring and heartfelt, whilst the second half settles down somewhat, making the shifting emotions far easier to digest as an outsider. It remains a difficult film throughout however and is as such not a film one would describe as ‘enjoyable’. It is interesting and moving and even enlightening, yet the audience’s sense of relief when the credit’s finally role is palpable.

All in all, a very impressive movie that moves with an almost daring slowness and precision, very much worth seeing but certainly not for the faint hearted.