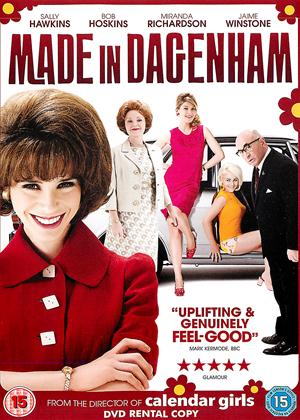 Synopsis:
With a stellar British cast Made In Dogenham is the inspiring story of the women who made history! Sally Hawkins is Rita O'Grady, a feisty yet warm-hearted worker at the Ford car plant in Dagenham, who leads the revolution for equal pay for women. Set in the swinging sixties against a stunningly colourful backdrop of beehives and Biba dresses. Made In Dagenham follows the emotional journey of a group of friends including Jaime Winstone and Geraldine James from the factory floor to the House Of Commons. With the help of Union shop steward Bob Hoskins they prove nothing is impossible if you stand up for what you believe, in this heart-warming must-see story!
Actors:
Sally Hawkins, Bob Hoskins, Andrea Riseborough, Jaime Winstone, Lorraine Stanley, Nicola Duffett, Geraldine James, Matthew Aubrey, Daniel Mays, Roger Lloyd-Pack, Phil Cornwell, Karen Seacombe, Thomas Arnold, Sian Scott, Robbie Kay, Andrew Lincoln, Rosamund Pike, Joseph Mawle, Kenneth Cranham, Gina Bramhill
Directors:
Nigel Cole
Voiced By:
Danny Huston
Writers:
William Ivory
Others:
Miranda Richardson, Louise Stjernsward, Yianni Georgiou
Studio:
Paramount
Genres:
British Films, Drama
Countries:
UK

Reviews (8) of Made in Dagenham

Interesting - Made in Dagenham review by CP Customer

Good characters and well acted, story explaining historical events. Worth watching in the style of the british working class film. If you like films like Brassed Off and The Full Monty you will like this.

Great British Drama - Made in Dagenham review by DB

Once again the Brits pull off a lovely piece of drama laced with comedy and very informative. The movie is reminiscent of the style of Full Monty and other similar successes. It's got a great sense of the period and really evokes the whole mentality of the repression of the female sex during that time, I loved the movie it is very funny and yet poignant also, well worth renting if you like excellent British made films!!

This film is not only dull, predictable and full of stereotypes and cariacatures, it is also inacccurate and factually wrong. It is a soppy story with a Hollywood byline to 'stand up for what you believe in'. That would be fine if it were entertainment! What annoys me about films like this is that people watch them and think they are watching an accurate portrayal of events and the time it's set. Not true at all. This is fiction. Also, it's VERY much a women's movie - though the woman I was watching it with thought it was nonsense too. It's like a propaganda piece too - and promotes the lie that women now earn less than men, which they do not, not for the same job (the average over a lifetime is lower for good reason - men do more work and take risks in the private sector more!)

A good all-rounder! - Made in Dagenham review by CP Customer

I loved this film. It had a great cast and told a fantastic story. It had a bit of everything thrown in - comedy, sadness and drama. Would thoroughly recommend!

Interesting and inspiring - Made in Dagenham review by CP Customer

Really enjoyed this movie, mix of comedy, drama and a bit of sadness, focusing on working class and historical changes. Good acting and performances

If you liked brassed off think you would like this

Brilliant - Made in Dagenham review by CP Customer

Fantastic story and brilliantly acted. it really brings it home how far women's condition has progressed since then! The period is very well recreated and Miranda Richardson as Barbara Castle is just simply superb.

Enjoyable - but it's a drama, not a documentary - Made in Dagenham review by RP

Well, I suppose it's intended to be a feel-good film with plucky Essex girls winning the war for equal pay for women. And it's had good reviews, so who am I to disagree? Frankly, it felt like a caricature – simplistic characters, industrial relations and politics, strewn with anachronisms, and workers who won but ultimately lost. It's not stated in the film, but Ford Motor Co ceased car manufacture in the UK in 2002.

The film aims for a period feel – and to a certain extent succeeds - but it's a bogus period feel. Also, it feels quite derivative of other and better British success-against-the odds films ('Billy Elliot', 'The Full Monty', 'Brassed Off' etc). The acting is good throughout – but make no mistake, that's what it is, acting. Real industrial relations isn't and wasn't like this – it's a drama, not a documentary. It's quite an enjoyable film so I'll give it 3/5 stars.

Nice easy watch - Made in Dagenham review by EM

Better than I thought it would be - nice story to tell, which must have been pretty sugar coated along the way for the film.

Made in Dagenham review by Alyse Garner - Cinema Paradiso

In 1968, the Ford auto factory in Dagenham was one of the largest single private employers in the United Kingdom; Made in Dagenham is the story of the small spark started by the underpaid female workers of the Dagenham Ford factory that eventually led to the feminist fire that was the Equal Pay Act.

Directed by Nigel Cole, who is best known for the 2003 British hit Calendar Girls, Made in Dagenham tells the story of Rita O’Grady (Sally Hawkins) who takes the cause of underpaid female factory machinists and brings it to the attention of the Unions, the Ford car company and the UK Government.

With Rita and the shop’s steward at the helm the women of the Ford factory go on strike after discovering that their poor working conditions are linked to a deep set ignorance and ambivalence toward women in the workplace. Rita discovers that she and the women she works with are paid a fraction of the wage of their male counterparts, solely because of their sex.

The film is undeniably interesting, the setting is excellent and the characters are very likeable. It has a real feel-good factor to it, with a light hearted and occasionally comedic tone. This makes the film very watchable and is pretty encouraging as it should help younger viewers to realise how recently such injustices were being predicated. However, it also makes the subject seem a little less serious; perhaps almost sullying the story the film sets out to tell.

Hawkins is brilliant and the rest of the girls at the factory are real characters, it is them and their personalities that help drive the film forward, rather than the arguably intense theme. There is not a great deal of time dedicated to the impact of the strikes upon the lives of the workers, small mentions to the financial strain pepper the latter half of the movie but otherwise the film dwells more in the positive and uplifting strong-undervalued-women section.