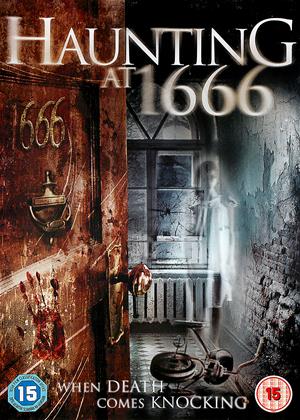 This found footage offering was originally known as ‘Haunting at 1666’ before inexplicably being re-titled ‘Knock Knock 2’ – a sequel to a production it is completely unconnected with.

Four film-makers decide to video themselves visiting various allegedly haunted retreats, often where a notorious gruesome act has taken place. We are told the details by readings from Wikipedia pages whilst travelling to each destination (this information feeds into events later on, but there are so many readings, narrated by the girls Jordan and Zelda, that the attention tends to wander). Happily, these youngsters – whose characters are given the first names of the actors in order to convince us what is happening is actually real, bless them – are completely without the swagger or arrogance usually associated with ‘teen’ characters of this ilk. Instead, they are refreshingly natural performers with genuinely funny silliness and chemistry: you can really believe these are two couples who have become close friends over a period of time, and you enjoy spending time in the company of these people; up to a point. So fuelled by their own humour, these are exactly the kind of people who would make the poor decisions integral to horror films such as this.

The final visitation occurs at a time when their camaraderie is getting a little strained. When they break into an empty house currently on sale, and it seems to have a mind of its own, tempers become frayed and … one of them disappears.

This is The Blair Witch Project, with the woods replaced by a sentient building. It is good, but it isn’t great. Chris Sheng, who wrote, directed and produced this, has some nice ideas and his restraint is admirable but this results in events that could be scarier. We don’t even get to see a lot of the reactions due to Aleks’s camera being left static at times. With very little visually to frighten us other than boarded up doors and windows, this member of the audience was left wanting a little more.

Aiden Cardei, Jordan Elizabeth, Aleksandar Popovic and Zelda Roberts deserve kudos for their believable chemistry and likeability. Their appeal allows us to care about their fate even if we aren’t given a great deal to be actually frightened of. My score is 6 out of 10.