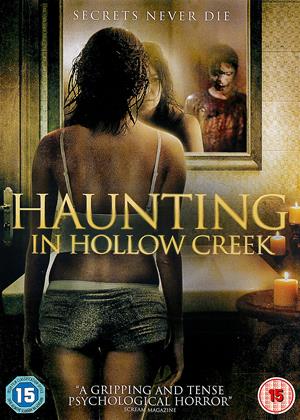 Synopsis:
Seeking inspiration for his latest horror novel, Blake Blackman, a New York writer, retreats to a remote cabin high in the Appalachian Mountains. There Blake is accompanied by his secret lover Angelica. Upon their arrival, the two learn about the unsolved cases of missing children in the mountain villages. When Angelica starts to have uncomfortable feelings about the cabin, she finds herself drawn into the mystery of the disappearances. Soon the strange happens become supernatural events when Angelica is visited by ghosts. As she attempts to discover the chilling truth about the disappearances, she encounters the unforgettable evil living in the hills.
A twist of fate turns the romantic interlude into an abduction murder case and the only thing that can save them now is the chilling truth and the guidance of the dead.
Actors:
Steve Daron, Guisela Moro, Burt Reynolds, David Ausem, Tony Reichert, Alyn Darnay, Karen Chimato, Victoria Marie, Earleen Carey, Michael Varde, Karen Ross, Blaine Burdette, Tina Pfeiffer, Alan Myles Heyman, Todd Stubbe, Steven D. Mairano, Adele Zin, Steve Alberts, J. Kelly Dennehy, Jeremy Mullins
Directors:
Guisela Moro
Producers:
Guisela Moro
Creators:
Guisela Moro
Writers:
Guisela Moro, Steve Daron
Aka:
Hollow Creek
Studio:
4 DVD
Genres:
Horror, Thrillers

Reviews (1) of Haunting in Hollow Creek

Married writer Blake Blackman (Steve Daron) and his difficult-to-impress partner, illustrator Angelica Santoro (Guisela Moro), who are having an affair, retreat to a remote cabin in the Appalachian Mountains in order for Blake to commence work on his latest book. The location is beautifully photographed and so stunning, their dog Brandy decides to spend more and more time away from the couple, exploring.

Nights spent in the remote log cabin, with the fireside blazing and lashing of the rain outside – it all sounds idyllic. Only the occasional glimpses of ragged, ghost-like children and Blake’s looming deadline threaten to ruin things. Angelica disappears after discovering she is pregnant, kidnapped and held hostage (alongside two ‘missing’ children) by a hillbilly couple residing in the nearby run-down town. The police suspect Blackman of killing her, despite the real kidnappers being such stereotypical inbreeds. The lawmen are stubbornly lackadaisical, even when Burt Reynolds turns up as Seagrass Lambert, whose grandson has disappeared.

Despite the disappearance of a number of children, it is only after Blake harangues the inactive police force that they make any investigations at the home of the two outcasts. By this time, the imprisoned Angie is heavily pregnant and there’s a growing uncertainty regarding her safety. This tenseness comes very late on in the film. Everything takes so long – Blake’s investigations, the delayed action of the police, the lack of horrific incident all conspire to make this a pretty drawn-out experience: at almost two hours, ‘The Haunting’ long outstays its welcome. A shame, because things could have been tense if 30-45 minutes was shorn from the running time. The idea of spirits of children helping Angie is a nice one, as is the race for time toward the end – but we spend so long getting there, and indeed the finale stretches so long, that any real tension is frittered away.