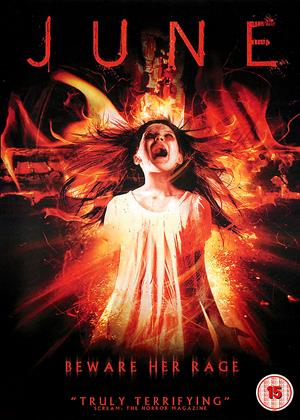 Crucial, with a film concerning a deeply troubled child, is the casting of the titular character. It is with relief to note that 9 year-old June is played by Kennedy Brice with all the awkwardness and sense of isolation required of an ‘outsider’, but she never slides into petulance or brattishness. After a difficult early life on a trailer park, she is adopted by Dave Anderson (mightily-jawed ‘Starship Troopers’ and ‘Sleepy Hollow’ actor Casper Van Dien) and his wife Lily (Victoria Pratt). The way their wholesome veneer of eager goodwill slowly becomes fragmented by June’s strange behaviour is well played.

And yet June is as much the victim of her ‘possession’ as anyone. Rather like early onset Alzheimer’s disease, her moments of clarity are very appealing and heart-breaking, merged as they are by the bewilderment she feels as to her condition: she shares her body with an ancient supernatural being, of course. “She’s a very special girl,” we are told.

Rather like a pre-teen ‘Carrie (1976)’, this tells the tale of one person’s frightening possession very well, but where it doesn’t deliver is ramping up the actual scares. The usually effective blackening-of-eyes effect used to signify inner darkness is creepy enough, but around the midway mark, it becomes apparent that this is as frightening as things are going to get.

Ultimately, ‘June’ starts with a lot of promise, but finds itself constricted by its approach to the story of demonic possession and goes more than a bit ‘sci-fi’ towards the end. This nullifies any ability to scare and loses the connection with the audience in its carefully built-up first half. It is well done, but emerges somewhat tamer than I would have liked.