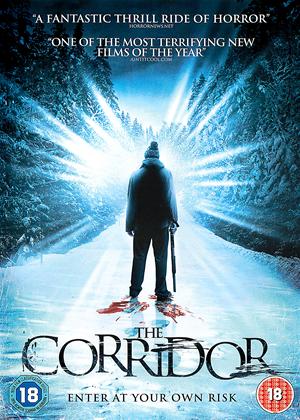 Synopsis:
Following his mother's death, Tyler suffers a nervous breakdown, which results in him severing the flesh of his childhood friends. Years later, the group of friends decide to reunite for a weekend at his late mother's country house in an attempt to rebuild friendships. Isolated deep in the snow covered forest, they stumble upon a mysterious supernatural hallway in the middle of the woods, which seems to give them a sense of euphoria. However it soon becomes clear that this energy force is transforming them into something much darker as one by one they turn on each other, taking their evil to the next level. Mayhem leads to murder as it escalates into a psychedelic race for sanity.
Actors:
Stephen Chambers, James Gilbert, David Patrick Flemming, Matthew Amyotte, Glen Matthews, Mary-Colin Chisholm, Nigel Bennett, Elphege Bernard, Heather Salsbury
Directors:
Evan Kelly
Producers:
Craig Cameron, Mike Masters
Writers:
Josh MacDonald
Studio:
Signature Entertainment
Genres:
Horror, Sci-Fi & Fantasy, Thrillers
Countries:
Canada

Reviews (1) of The Corridor

This is a curious film that seems to be about many things, at least initially. Tyler (Stephen Chambers) sees his mother dead on the landing of his family home. She has overdosed on pills apparently, and the realisation sends him on a nervous break-down. When his friends come round, he is hiding in a cupboard. When they try to help him, he attacks them with a knife.

A while later, Tyler has seemingly recovered, helped by a course of therapy. To build bridges, he and his friends agree to meet in a snowbound retreat for a ‘boys’ weekend’. They seem to be a tight group, and soon, Tyler is back at the heart of the friendship – only Everett (James Gilbert) seems to want to scupper things; he seems determined to ply him with alcohol, which is inadvisable given Tyler’s course of medication.

Big lad Bobcat (Matthew Amyotte) sports a bald plate that is never, ever convincing. It is a curious directorial decision, but made so we can hear dialogue about baldness keeping him virile and ‘having the kids to prove it’ (which is an unknowing dig at Jim (Glenn Matthews), who is secretly impotent). All this spurs on further antagonism later.

So when Tyler, outside in the wastes alone, finds what appears to be a corridor in the middle of the woodland, he feels his sanity crumble. And yet he proves to be the only one who can see through the violent chaos that ensues between the group.

Sadly, at least for me, the latter half of the film dissolves into a trippy mesh of special effects and shouting. This would appear to be a logical progression from the enjoyably illogical events that lead up to it, but I found these developments less satisfactory, although Tyler’s story at least achieves a sense of closure within the chaos.