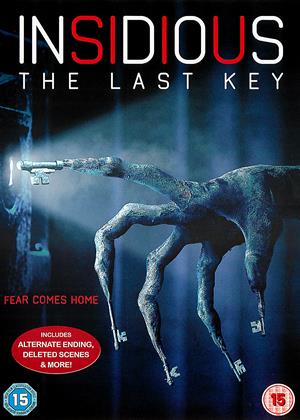 Reviews (1) of Insidious: The Last Key

What a waste of time - Insidious: The Last Key review by HH

I enjoyed the first Insidious, but this is awful. So slow and boring. The only good thing is the new demon - good costume! The main character (the medium) is an awful actress, and her sidekicks' attempted witticisms are painful. Don't bother.

There was hope for the future of Insidious with the previous chapter noting remarkable chemistry in the cast. The Last Key, however, leaves me less enthused for the next chapter. Don’t get me wrong; there’s still a lot left over from what made Chapter 3 so much fun, but I fear this series may be losing its way for coasting on such brilliant characters and rarely giving them a meaty story. The lovable ghost hunting trio of a little old lady and her two bumbling young associates take center stage make for great chemistry, but even when they’re given a story more focused on their arcs than anything else, I still felt like they haven’t yet arrived with a movie that reaps their full potential.

In the realm of horror franchises, it’s always pleasant to return to the character of Elise, an old ghost talker/fighter played with determination and spirit by Lin Shaye. She has a warm personality in the morning and a no-nonsense kick-butt attitude when confronting the ghost dimension. Her chipper spirit makes her a pleasure to work with that it’s easy to understand why ghost-hunters Tucker (Angus Sampson) and Specs (Leigh Whannell) love working with her. Shaye has such a gentle and noble attitude that who wouldn’t want to hang around her, be it breakfast or paranormal investigations.

Shaye takes center stage for The Last Key with her origin stories deeper revealed with a new case that parallels her troubled past. Her father was abusive of her powers, her brother didn’t like being haunted either, and her mother killed herself. Her abilities to see ghosts didn’t exactly bode well for living so close to a prison facility where electric chair death sentences were a common occurrence. There’s a lot of bad memories in that spooky old house and, of course, her next assignment is at that very spot.

The Last Key comes with a lot of fun and creatively spooky asides as the investigation develops. Tucker and Specs naturally provide the comedic element, hopelessly trying to attract local girls with their ghost-hunting skills. They also boast a new ghost-hunting RV that carries all their gear. They’re going to need it with solving the mystery of the old haunted house with a new paranormal monster prowling in the basement. The big bad this time is a creature of keys for fingertips. Once he traps you, he uses each key to lock out your senses, locking out your voice if he’s tired of hearing you scream. But he’s only one part of a much twistier tale of ghosts and historical deceptions.

There was a constant smile on my face as with all the Insidious movies because these characters are so loveable. Even when handed some awkwardly stiff dialogue, all the actors put forth their best performances so that I never got tired of watching Lin Shaye smile, Angus Sampson intimidate, or Specs stammer. They’re so good in these roles they could easily turn this franchise into a TV series. But while I kept on grinning, I was also waiting for the movie to finally take off from its set of cute aside and spooky effects. What hampers most of this is that there’s just too much thrown at the screen to keep things going. Too many character arcs to develop, too many haunting elements, and far too many twisty twists for this film to settle.

This fourth chapter of Insidious is so frustrating to watch because it’s just a few steps away from becoming the strongest series in this Blumhouse cinematic universe of The Conjuring and Annabelle. Which is why it’s so sad that this particular narrative looks like the end of the road for this trio. Maybe it should be if the next film won’t give these characters the movie they deserve. If so, bring on the series!