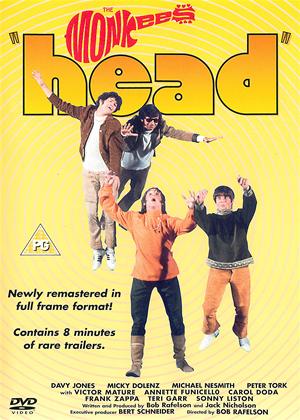 Not released
After Hours

Firstly, whoever wrote the blurb describing this film as "A Hard Day's Night" on acid was obviously making a plausible guess which unfortunately turned out to be wrong, as whoever writes these blurbs so often does. It would be more accurate to say that it resembles "Help!" directed by Luis Buñuel. On acid.

The Monkees were of course nothing more than a blatant American Beatles rip-off created by a huge corporation to make a lot of money. So it's truly amazing that, knowing they were reaching the end of their shelf-life, they managed to persuade their bosses to let them make a film infinitely more daring and subversive than anything the Beatles ever achieved in that area, possibly because the real Fab Four squandered their one shot at true artistic freedom by getting too stoned to focus the camera properly, faffing about on a bus for a fortnight, and then trying to pass it off as a movie.

Before we've even reached the opening credits of "Head" (it's almost unbelievable that the studio bosses missed that drug reference!), Mickey Dolenz has apparently committed suicide and gone to Psychedelic Mermaid Heaven. After that it just gets weirder. Unlike the Beatles, although they don't actually take drugs onscreen, they do manage to include some very blatant marijuana references. They also merrily sing a song with lyrics admitting that they're a manufactured band, and portray their hysterically screaming fans (intercut with footage of Vietnamese civilians panicking because their lives are in danger, including a clip of somebody being shot in the head for real) storming the stage and tearing the band to bits, only to discover that they're plastic dummies. Comedy skits similar to those on their juvenile TV series end with the boys getting bored and literally breaking through the scenery in search of something more interesting. And so on.

The plot, insofar as there is one at all, is that the Monkees repeatedly end up in a Kafkaesque factory mass-producing a mysterious product which turns out to be themselves, and despite their best efforts, they're unable to escape from this recurring nightmare. Along the way we get Davy Jones, the stand-in for Paul MacCartney, fighting a real-life heavyweight boxer (Sonny Liston) and having his pretty face graphically beaten to a bloody pulp, dim-witted nice guy and George Harrison substitute Peter Tork mercilessly sending up George's fascination with Indian mysticism, and the most ironic bit of product placement ever. And of course the famous scene in which our heroes pretend to be Victor Mature's dandruff.

They may have been the least authentic sixties band of them all, but somehow the Monkees made what is possibly the most genuinely subversive counterculture movie of the entire decade. It's certainly a lot of fun, though to perceive it as a masterpiece, you'd have to be as wrecked as Jack Nicholson was when he wrote it. But you'll have to admit that, although they're not the world's greatest actors, in that respect at least, the Monkees were better than the Beatles.