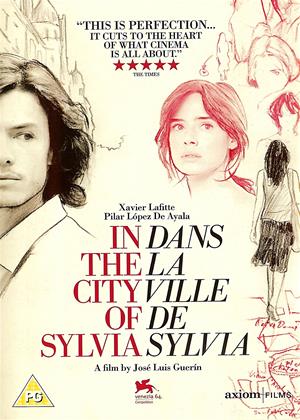 Sign up
The Beatles: Eight Days a Week: The Touring Years

Reviews (2) of In the City of Sylvia

A movie where the viewer is not fed a narrative dialogue but instead a visual dialogue. People in streets, trams, and faces. In the faces we create the dialogue. Faces reacting as in a documentary but telling a story of a dream or a quest that we know hardly anything about. In spite of the documentary background of a very pretty city peopled with more than a fair share of pretty people, there is very much a tension in the way the laid-back dreamy protagonist zig-zags through the streets following the woman whom he imagines is someone he met a few years earlier. The stunning filmography, as well as the music and street sounds combine, unobtrusively, to make the movie mesmerizing. Watching the movie had me looking (like the protagonist) to recognize perhaps some familiar face amongst the myriad reflections in tram and shop windows. An excellent, but very different, movie, and certainly not one for those who expect chirpy banter and car chases in their movies.

A point often overlooked: here is a film in which most of the words are spoken by Debbie Harry.

Or, rather, sung. "Heart of Glass" plays for a considerable time in a Strasbourg bar which has previously mentioned several times, and duly visited by Xavier Lafitte, who plays El, a young artist who has returned - after six years - in quest of a girl with whom he had then talked before the moment passed.

And now, during three days punctuated by brief nights, in a film largely silent but for the clicking of shoes on cobbles and snatches of overheard conversation, he sits outside a café, sketchbook in hand, pencil scribbling, his eyes upon those in groups around him.

José Luis Guérin's film - just 84 minutes long - is very much peopled by jeunesse dorée rather than politicians and bureaucrats. Clumsy, distracted, El is preoccupied, so much so that he sees an elegantly-dressed woman (Pilar López de Ayala) whom he takes for the one who slipped away.

And so, to adapt Klee's phrase, this artist takes a line out for a walk, a very long one: he follows her through street after street while a varied population traverses the scenes - a paunchy man in a vest, a woman with a pram. Does she know that he is doing so? Will they meet?

Scarcely anything is said. It is all the very opposite of the Before Sunrise series. And yet it never fails to let one's interest drop away. One could call it a short-haul Rivette. As such, it has divided opinion in the thirteen years since it appeared (there is a solitary Nokia rather than pervasive smartphones). Do not expect everything to be wrapped up; an enigma remains that - and one might wonder about the brief shot of a newspaper headline about a New Crime.

Nothing can be discounted. This is a tale of obsession lightly borne.