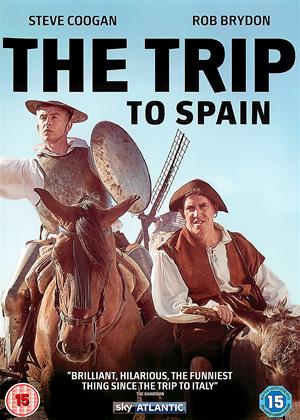 Reviews (5) of The Trip to Spain

See that DVD cover image of Steve Coogan and Rob Brydon as Don Quixote and Sancho Panza? It seems like an interesting idea, and maybe it would be if it had anything to do with the series as a whole. But the reality is that the dynamic duo briefly dress in those costumes for a photoshoot at the beginning of episode 5. It's all over in two minutes, it has nothing much to do with anything except that it's a Spanish cliché, and it isn't funny. Far more time is spent quoting Monty Python's Spanish Inquisition sketch, and at least that's moderately funny, though less so than when the people who wrote it first performed it half a century ago.

"The Trip" was rather amusing. "The Trip To Italy" less so, and much more self-indulgent. And this is, as the DVD cover proudly proclaims, the funniest thing since "The Trip To Italy". Frankly, at least half of it could have been performed by any two reasonably articulate middle-aged blokes who were being paid to go on holiday. This problem is most obvious in the scenes where our heroes visit gourmet restaurants, eat very expensive food, and say how good it is. Watching other people having dinner is only entertaining, especially in a funny way, if something goes badly wrong with the meal. Yet what we have here is two real comedians pretending to be slightly fictionalised versions of themselves having meals at real restaurants which obviously agreed to take part on the understanding that any criticism of their food would be edited out. As the comedy gets thinner, the pointlessness of these blokes visiting restaurants at all becomes more and more obvious. The scenes where they just wander around improvising in random locations are a lot funnier because they don't have to keep stopping to put things in their mouths and tell us how yummy the posh nosh they're being paid to eat is.

As for the fictional elements, why bother? I'm not a close friend or relative of Rob Brydon, so I have no interest in watching home video footage of him mucking about with his wife and kids like any ordinary non-famous person does. So why would I want to watch him doing these things with people who are only pretending to be his family? One scene in particular, where the Brydon and Coogan spontaneously start performing Shakespeare to an audience of two production assistants and it soon turns bizarrely competitive, shows how much better they are (especially Coogan) when they just do their own thing instead of following a script which is neither funny nor interesting.

I won't be watching any future continuations of this increasingly pointless franchise. Following two off-duty comedians around waiting for them to do some proper comedy rather than just chatting is television at its laziest, the scripted parts are conspicuously less entertaining than the unscripted messing around, and the restaurant scenes are so sycophantic that I couldn't help wondering if bribery was involved. As for the good jokes, the first time I truly found something amusing took so long to arrive that I looked at the timer, so I can tell you that it occurs 23 minutes into episode 1, which is only 29 minutes long. Overall it's mostly harmless, quite often vaguely amusing, occasionally genuinely funny, and only rarely depressing. But mainly it's just lazy. Ah well, if the people who make this can't be bothered, neither can I, and when they graze their way through France in 2020 I won't be joining them.

Superb, yet again - The Trip to Spain review by MB

All three 'Trip' series are superb, in my opinion. It's rare that I find myself laughing so much. It's partly scripted and, I presume, partly or largely improvised. Rob Brydon and Steve Coogan become caricatures or versions of themselves and then proceed to jibe, banter and battle with each other - competing over which of them is the most successful and the best impressionist. It's interesting to hear them critique each other's impersonations - quite an insight into the art of it. Their Mick Jaggers are brilliantly funny.

You'll like this if you're happy to meander with them through Spain, visiting restaurants, eavesdropping on their chatter about something and nothing. But don't be deceived, this isn't just whimsy and silliness - there are profound major life themes running underneath, about love and ageing, fidelity and parenthood.

It's subtle, clever and silly comedy for grown-ups. Not only that, but it's beautifully filmed, lovely scenery, interesting to see the chefs in action, and wonderful snippets of piano music from Michael Nyman.

Funny Ha-ha - The Trip to Spain review by DW

I have to say I rather agree with the second of these reviews, finding much to enjoy about Brydon and Coogan in this, the third in their Trip series. Previously I had watched the first two in the series on TV but, not subscribing to Sky, had missed viewing their trip to Spain.

I found it just as hilariously funny as the earlier films, loving the way they poke fun at each other and their attempts to satirise and make impressions of various luminaries, most of whom thank goodness are of well known performers, so that even I can recognise their targets.

Yes, some of it may be scripted, there are glimpses into their personal lives which may, or may not have elements of fiction, for instance, but I really don't care. I do find it laugh out loud, a pretty rare experience these days. It is silly in parts but also erudite and sophisticated.

One caveat only and this is to do with watching one episode after another instead of one per week when viewing on TV. I do need to add that I think Brydon and Coogan operate more successfully when taken in small doses rather than when six episodes come together. A surfeit of riches, I think, and they are probably enjoyed all the more when not watched in sequence. The solution is most likely to buy a copy to keep at home for more leisurely viewing.

First of all, I love Steve Coogan, don't mind Rob Brydon & adore Spain - so this should have been perfect for me. We enjoyed the first couple of episodes but then found the whole premise increasingly annoying to watch. There's a scene in episode 3 or 4 where they each do endless Roger Moore impressions & by the end of it I literally wanted to scream with frustration!

Not for me, would not recommend, won't be watching any of the other Trips etc.

Loved this - The Trip to Spain review by robbie70

I love this franchise ! Had to order the CD via here Cinema Paradiso as I dont have the Sky subscription after the rights were bought out (away from BBC2). I love Coogan's and Brydon's impressions - both incredibly talented !!

When Coogan does his Mick Jagger with the associated body posture, grimacing facing et des lèvres boudeuses, the cherry on the icing is the flick rasp clap of his hands held above his left shoulder - head tilted slightly askance, lips pouting and a throaty pitched murmur quivering - has me in fits of giggles.....

I love the drive through the gorgeous Spanish countryside and the restaurants where they eat their lunches and the plates you see - the food is out of this world - I would love to repeat this trip and visit the locations mentioned ! I also love how Brydon and Coogan draw on history to illuminate some of their conversation at the appropriate moment and also some lovely anecdotes from the world of celebrity.... I didnt know that after Sean Connery left his first meeting with Cubby Broccoli and Harry Saltzmann for the role of Bond - they observed him crossing the road and remarked that he walked like a panther.

I watched the CD in two sittings - watching 3-episodes in eat siting.....