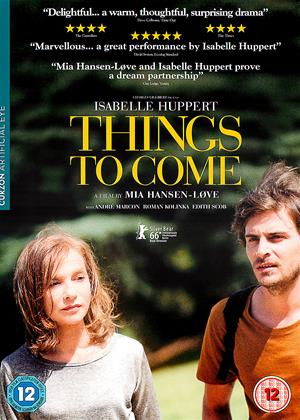 Reviews (2) of Things to Come

Tres Bien - Things to Come review by BE

A nicely crafted little film about a middle aged teacher of philosophy (Isabella Huppert) coping with her rapidly changing life. She has a quiet elegance and embraces her new found freedom and all that it has to offer. A French film doing what the French do best - portraying everyday scenarios with skill and aplomb. Lovely acting and enjoyed.

Worth a watch - Things to Come review by Plastic Teaspoon

A nice French film about relationships end endings. I found myself at times sympathetic to the heroine and at other times annoyed by her. She is the instrument of both her own fortunes and misfortunes - a strong and uncompromising woman but also at times a selfish and domineering woman too. She is often critical of everyone round her but doesn't actually have anything better to offer herself.

Enjoyable to watch but only 3 stars as the film didn't really have anything to lift it above the dozens of other films in the genre.

Calming, inspiring and upbeat: Things to Come starring Isabelle Huppert presents itself as a meditative, existentialist tale of loves long lost, mid-life doubts and double-backing on promises made as early as one’s naive youth, with one clear message in mind – time conquers all. And while at time grazing the surface of several philosophies throughout humanity’s past, the film does not linger too long on said subjects and instead pushes forward in a calm and persisting way.

Once again, Isabelle Huppert proves why she is the best currently working actress on the worldwide scene.

Meet Nathalie Chazeaux (played by Isabelle Huppert), who is the living embodiment of a walking, talking success in the theory of life, but (as we soon find out), starts failing at basic human tasks such as maintaining relationships and fixing her own personal wrongdoings. This is not to say that Nathalie is a failure at life, but, amidst all that has happened to her – she refuses to accept the reality and battles her emotional retreat with, strangely enough, a positive and upbeat attitude which acts as a cocoon under which she pushes down her negative feelings.

Soon enough, her husband declares infidelity and leaves to explore his feelings with a younger woman – an unlikely duo which elicits chuckles from Nathalie as she passes them from a moving bus. Also, as if this wasn’t enough, her daughter is soon to give birth to a baby in a dissolving environment that is devoid of all love that once inhabited it. And her mother is on a deathbed, claiming rights to Nathalie’s attention as she slowly embraces her mortal coil.

From here onward, Mia Hansen-Løve’s heroine is struck by the sudden realization that all good things must come to pass. Whether it is relationships with people, objects of affection or life itself – all kneels before the destructive power that is entropy. She then goes to rekindle a relationship with one of her past students named Fabien (played by Roman Kolinka), in a mother-son bond that proves effective and fuels her coping mechanisms. Did I also mention that Nathalie Chazeaux taught philosophy?

Also, Pandora – an overweight black cat whose allergic tendencies tends to disrupt everyone’s daily routines, especially Nathalie’s contemplations about life in general and where it went wrong, soon abandons her master venturing off into the woods. The next morning Pandora returns with a dead mouse in her mouth – pledging sanctuary yet once again. Just like Nathalie: against all overwhelming odds, Pandora persists and stays to what she holds true.

Things to Come features little theoretical philosophy for a film that centers on a protagonists that teaches philosophy for a living, but is nevertheless a film that imposes itself as a storytelling masterpiece and a milestone in actress Isabelle Huppert’s impressive acting streak.

Go check it out.