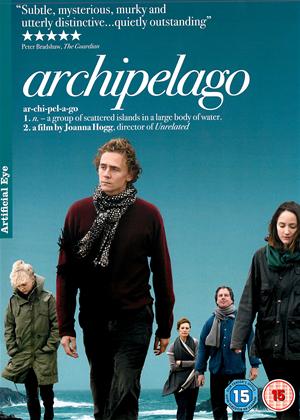 Synopsis:
With her son Edward (Tom Hiddleston) about to embark on a volunteer trip to Africa, his mother gathers the family together for a getaway in their holiday home on the idyllic Tresco, one of the Isles of Scilly. However, it's not long until deep fractures within the family begin to surface.
Actors:
Christopher James Baker, Kate Fahy, Tom Hiddleston, Andrew Lawson, Lydia Leonard, Amy Lloyd, Mike Pender
Directors:
Joanna Hogg
Producers:
Gayle Griffiths
Writers:
Joanna Hogg
Studio:
Artificial Eye Film Company Ltd.
Genres:
British Films, Drama
Countries:
UK

Like watching paint dry. Actually, no. It was less interesting than that.

I thought it would show off the island, but it could have been set anywhere on any coast for all the feeling one got of it being shot on Scilly, apart from the helicopter scenes.And it's only 'cos I grew up in Penzance that I instantly recognised the helicopter.

The reason I carried on watching through to the bitter end was that I just kept thinking "there must be more to it than this". Sadly, there wasn't.

Why?? - Archipelago review by Mehitabel

What a waste! Why make a film on beautiful Scilly -- the main reason I wanted to watch it -- and barely use those wonderful settings? The indoor and garden scenes could have been anywhere.

I found none of the characters likeable, or even interesting. I don't know if the dialogue was improvised, but it sounded it. All that drooping about muttering vaguely in upper-class accents ("It's just I.. well, you know..um..I sort of..er..oh, yes, I will have some more tea..") not only got very irritating very quickly, it was also unconvincing. I just don't think ANYONE is that inarticulate!

Trying to think of something good to say... Nope. This is the first film I've ever watched in which I could find no redeeming features at all!

But I did give up after 40 minutes, when it became obvious the plot development I was waiting for, or the sense of pace and direction, just weren't going to happen.

my home life could give better dialogue and plot. - Archipelago review by DG

I read a review about this film that said 'the birds have better dialogue than the actors' totally right! birdsong is marvelous, as to human dialogue..well i think they could of filmed my family life and got more interesting dialogue and plot. MUNDANE!

There is far to many distance shots of the lovely Tom Hiddleston for any hot blooded woman to enjoy, I mean we want close ups!

So really the film is ... well...odd! But saying that we watched it all (if you hope something will happen it wont) but I did end up enjoying the self importance of the characters slowly dissolving to show how shallow and sad they were all apart from one, which in its way is quite clever.

So to sum up, if your an action packed film lover definitely not for you. if you like the odd art film then possibly you like this, give it 15mins if your not liking it by then you wont be after an hour. if your a student of the human condition you may well love it, if your just watching it for the lovely Tom, don't bother stick on Thor instead!