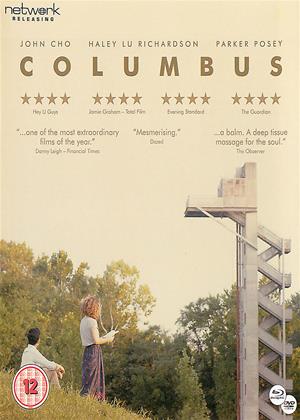 Beautifully acted and the cinematography is outstanding with the local Architecture becoming an important character in the film.

Great that a film can succeed without violence or cgi , just clever dialogue and an engrossing story that slowly reveals more than you expect from the opening scenes.

If you love Architecture and a great movie, please give COLUMBUS a chance, watch with an open mind and you will love it.

Rewarding but felt a little like homework - Columbus review by KC

I was put off this movie at first because of the long silences and inaudible mumbling, but it repaid the time I invested in it. When the characters decided to speak clearly, they were very clear and, although the characterisations weren't as complex as the movie liked to think they were, the slow subtlety of the film drew me into a long meditation on what it is to be human and the choices I make about where I place my attention.

The film is very slow with far too many long silences when nothing happens. The dialogue is often difficult to hear and most of the characters seem to be reciting passages from architecture books rather than conversing naturally.

The film maker clearly loves modernist architecture and there is a pivotal scene when Jin asks Casey for her emotional response to a building, and I was hoping at last for an interesting insight, but frustratingly, you see her mouth moving, but the voice is replaced by more of the drone-like music which pervades the film and would be more at home in a horror film, creating an inappropriatly eerie atmosphere.

The cinematography is impressive and shows the architecture to good effect.

Easy on the eye (and ears) - Columbus review by BE

Quite a nice little movie. The static camera work and lack of background music made it a bit different. Also very naturally acted by the two main leads. I cannot read any more into it than that.