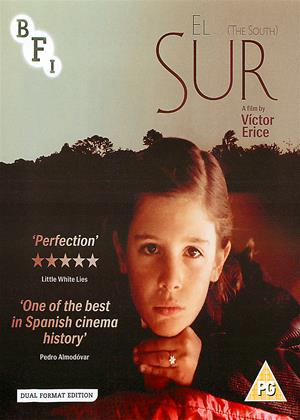 Reviews (3) of The South

The enigmatic south. - The South review by RhysH

A beautifully restrained, enigmatic film. There are no dramatic moments no intense emotions just a steady trickle of thought and reflection. Beautifully shot, light, shade, reserved colour. Some lovely moments between mother and daughter and father and daughter, in particular at the celebration of the daughter's first communion.

Good start but becomes tedious - The South review by ML

We enjoyed probably the first half of this film but were disappointed as it became increasingly slow moving as it went on. It was almost two films in one package.

Very atmospheric but rather slow moving - The South review by CD

I agree with other reviewers that this is an enjoyable and beautifully shot film but for me it dragged a bit in the second half - it becomes rather claustrophobic around the limited character set but the relationships are subtly portrayed - well worth a look.

The South is a triumphal cinematic experience based on a story by Spanish novelist and short story writer Adelaida Garcia Morales, whose inclination for magical realism has put her on the international spot. To this extent, the film portrays the relationship between a daughter and her father, a truly mysterious and strange man, who is obsessed with a certain actress from his youth. What’s interesting is that The South is set in the northern parts of Spain, not the south, which makes the whole ordeal seem even more bizarre than what it really is (not really, since the producers of the film didn’t fund the film as per the expectations of the director, and so the film ended up shorter than what was envisioned at first).

In it, Adelaida Garcia Morales (through director Víctor Erice) tells a very melancholic story about the innocence of childhood and the loss thereof when one grows up enough to realize that the world is not as they imagined it. And so, our protagonist Estrella is torn between the upcoming challenges in life, both on a micro and micro level as well. On one hand, she’s in a constant struggle between deconstructing her father’s deity-like figure and building him again into something more reasonable – a real human being. Estrella struggles with this notion on couple of occasions, which just proves her (again) innocence towards everything that’s not her, i.e. everything external. And so one day, her grand illusion is shattered to pieces after she finds out that her father is not what she was imagining for this whole time.

Another theme that The South explores is that of lost loves, and it does it with such diligence and charm so that at times one starts wondering: is it really that difficult to let go a person you once thought was everything to you? The South doesn’t cut any corners and does not offer any exact answers either; it’s up to the viewers to dissect and pick a side, or stay indifferent for that matter. All of these notions are conveyed perfectly by both actresses that portray Estrella (Sonsoles Aranguren as an 8-year-old and Icíar Bollaín as 15-year-old Estrella). Which inevitably brings me to the visuals of the film.

The South is built upon a hypnotic visual thread that protrudes all throughout and elevates the whole experience to new, variably unexplored heights. As such, the style and movement of the camera is stylistically impeccable and only adds to the mezmerising nature of the film.

All things considered, The South is an artistic masterpiece and a film made for both film lovers and nurturers of the written word; As such, it would be a real shame if, belonging in either of the two categories, you miss on this little gem.