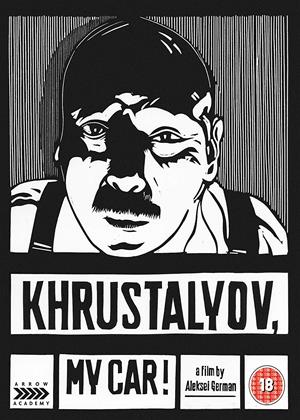 Reviews (1) of Khrustalyov, My Car!

To classify Khrustalyov, My Car! as a ‘comedy’ is to push the word almost to breaking point. Yes, this film is intermittently humorous, but Aleksey German’s humour is of the grimmest kind. For most of its two and a half hours (the length is entirely necessary), Khrustalyov, My Car! is not so much a satire as a nihilistic carnival. It’s less arduous than the hellish Hard To Be a God, but it’s clearly the work of the same creator. Scene after scene is crammed with hyperrealist quasi-documentary detail (the use of monochrome has the effect of giving almost equal status to every piece of the image), but the narrative proceeds with something like the illogicality of a dream. It’s a combination of two entirely different modes, and I don’t know of any other director who has achieved anything quite like it. There is rarely a moment in which the camera comes to rest, or in which one knows precisely what is happening or why. People talk (or shout) over each other constantly, and the meaning of their utterances is often opaque. A Russian speaker, with some knowledge of the history of the period, would obviously find the text less elliptical, but the barrage of verbal and visual information would be no less overwhelming. The death of Stalin – recreated in appalling detail – doesn’t occur until the final stages of the film. Before we get there, we spend a lot of time in an overpopulated kommunalka. These communal apartments were created by the Soviet Union as a solution to the urban housing shortage, and were conceived as utopian dwellings in which each family unit would be subsumed into the greater family of the socialist community. In German’s film, the kommunalka is a kind of bedlam in which it is all but impossible to function as an individual. Khrustalyov, My Car! is a nightmare, but what it gives us is a collective nightmare, rather than the torments of any individual sufferer. In some respects, it might be compared to Pasolini's Salò: it has just one scene of (extreme) sexual violence, rather than the remorseless depravity depicted in Pasolini’s film, but they are similar in the bleakness and relentlessness of the director’s vision. At times, the madness, the chaos and the misery of Khrustalyov, My Car! are barely endurable, but I think it’s a magnificent thing nevertheless. It does something that only cinema can do, and only Aleksey German could have made it.