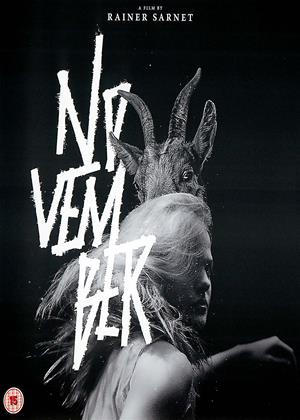 Synopsis:
Young Liina (Rea Lest) and Hans (Jörgen Liik) are preparing to marry in their village in the woods, when Hans becomes entranced by the arrival of a visiting Baroness (Jette Loona Hermanis). Love spells are conjured so that each receives their intended mate, but there are more sinister things afoot. Death can visit in the form of a farm animal...but it's fine because one can hide by wearing trousers on the head. And, besides, the dead can come back to the village and chat anyway...although when the devil arrives, don't try to cheat him. And then there are the "kratts" - supernatural servants made from discarded bones, tree branches, and trash...just make sure to give them work to do, or else.
Actors:
Rea Lest, Jörgen Liik, Arvo Kukumägi, Katariina Unt, Taavi Eelmaa, Heino Kalm, Meelis Rämmeld, Dieter Laser, Jette Loona Hermanis, Jaan Tooming, Klara Eighorn, Ene Pappel, Ernst Lillemets, Sepa Tom, Tiina Keeman, Heino Paljak, Ilmar Meos, Aare Lutsar, Mari Abel, Aire Koop
Directors:
Rainer Sarnet
Producers:
Katrin Kissa
Writers:
Andrus Kivirähk, Rainer Sarnet
Studio:
Eureka
Genres:
Drama, Romance, Sci-Fi & Fantasy
Countries:
Estonia, Drama, Romance, Sci-Fi & Fantasy

I had the good fortune to see this at Leeds International Film Festival and I hope it will go on wider release in 2019. Whether you choose to see this lurid tale of golems, shape-shifters, satanic pacts and bleeding crucifixes as merely an exercise in sensationalism, an anti-romance, a celebration of Estonian national resilience, or an oblique criticism of our own present-day fetishisation of wealth and technology, you certainly won't find it unmemorable.

It appears to owe little to the conventions of Hollywood or Western European genre films. Certain elements stand out which are perhaps more reminiscent of Polish, other Eastern European or even Asian cinema. The action scenes, which tend to be abrupt, with little build-up or aftermath; more emphasis on atmosphere than character development; the predominance of close-ups and half-shots for filming the principal characters; a cynical world-view; and the deployment of very dark and understated humour, to the extent that it's hard to tell whether some scenes are meant to be funny or not. The evocative high-contrast monochrome photography is evident from the stills, the score is outstanding too. Anyway, it's great to see such a tiny country (population 1.3 million) punching above its weight by making such a high-quality film.

This is an unsanitised representation of medieval peasant life, full of superstition, deprivation and the humour of bodily functions. The story jumps from scene to scene and there is plenty of evidence of the director's background in animation film, not least in the eerie creations known as 'kratts'.

The film is a bit like a shamanic-psychedelic version of Bergman's 'Virgin Spring', with Breughel and Bosch thrown in for good measure.

From the moment this film begins, the audience is assailed with images that are so exotically bleak, we wonder how they were created. Whether computer-enhanced, or purely some exquisite cinematography doesn't really matter; what emerges is an immediate assault on the senses that bathes the viewer in atmosphere. And it is fair to say that atmosphere does not let up until after the final credits have rolled.

It is true to say that, at its heart, the plot is a thin one. In a nutshell, it concerns stoical Liina (Rea Lest) and her battle to be noticed by handsome Hans (Jörgen Liik). But if you are looking for a story of love and longing, it won't get much more unusual than this.

Based on the novel 'Rehepapp' by Andrus Kivirähk, 'November' is steeped in pagan Estonian folklore, with werewolves, magic, spirits, and lots of stealing. Filmed in beautifully stark black and white, Director Rainer Sarnet (who also adapted this) ensures that every scene is poetically framed in such a way that what emerges is one of the truest forms of cinematic fairy-tale (albeit very dark) I have ever seen. Central to this is the notion of the 'kratts' - surreal, mythical-looking creatures made from bone and wood and metal, who are summoned to perform tasks for the villagers, from menial to magical. They look ridiculous, but convincing and, with no saccharine set-pieces, command a very real melancholy - and humour.

One of the very first things we see is one of these ungainly, impossible creatures as it appears to attack some livestock. The unfortunate creature is obviously distressed, and we fear for its safety. What actually happens, however, defies and exceeds our expectations - which is a trick the film manages to pull off many times throughout its run.

At a little under two hours, it is a challenge to weave such delicate imagery successfully throughout, but due to many moments of surprise, as well as outstanding beauty, 'November' accomplishes this. Dark, brooding and peopled by characters with faces as gnarled and fascinating as the landscape around them, this film gets a mighty 9 out of 10 from me.

November is a film that is slathered surrealism most intriguing in its bold black-and-white ugliness. There’s a bit of history to its setting, posing a tale of intersecting lives within a Medieval Estonian village. Yet the world seems almost alien and most sci-i,, harkening to the simplistic wonderment of Stalker and It’s Hard to Be a God, where fantastical ideas take hold in the more depressing of real-world environments. November doesn’t quite feel as bound by that same somberness and contemplation but certainly carries that familiar feeling of residing within a much different space, almost incomprehensible in its mechanics.

This 19th-century fantasy embraces much of the dark and the weird. The plague is just as much of a concern for the community as that of werewolves and demonic forces. Magic is present but used in odd ways. In particular, a spell has been cast on farming equipment that comes to like in a strange sort of Fantasia manner. It’s understandable why magic would be favored in this light. Suppose you’re desperate for a cow on your farm and want to steal one from your neighbor. One inanimate tool comes to life not only leads the cow out of the barn but transforms into a helicopter and hoists the animal into the sky. It’s a surreal note to open the film on yet paints an interesting picture of how such forces are utilized within this village.

It’s for this reason why the poor and the rich favor the use of such mystical forces for their own gain seems mildly understandable, for as odd as the film approaches its stark world of filth and fables. Two key stories follow a peasant girl and royalty who have love on their minds, either for themselves or for their family. Hoping to push through romance, they seek out spells and rituals from very strange people who wield such powers. They’re hoping that such awkward devotion to the spiritual will bring about the love they seek. It sounds superficial and immoral but considering they reside in a world where farming equipment can transport cows in the air, anything is not only possible but beyond moral fortitude.

Of course, the magic doesn’t quite work for them as it’s more intriguing to watch such aspirations tumbled down into the muck of this wet and depressing village. The divide between the rich and poor creates an unspoken unease, where the characters can sense something is unfair in such an environment but can’t quite put their finger on it. It is only when the cold snap of reality hits them in the faces that they possibly think about how magic is so limited when it comes to the matters of the heart. At least that’s what one hopes as they draw their last tragic breath.

November never makes its story simple to digest, always presented in a manner to seem overtly strange, dirty and uncomfortable, refusing to let the audience pin it down so easily. While this aspect may be frustrating to some audiences, I found it all the more intriguing trying to fathom how a community bound by superstition and commitment to the spiritual can falter so easily in such comfort. It’s also really funny to watch a cow fly via a magically-moving piece of 19th-century tech.