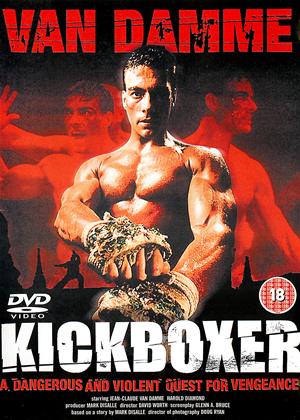 where do i begin? a classic van damme masterclass and no mistake. a highly original plot where jean-claude must take revenge on the fighter who crippled his brother. to do this jean must learn the art of muay thai. but orthodox training will not do, for this he must have large coconuts dropped on him, having meat attached to his legs and getting chased by ravenous dogs and have his legs pulled apart by ropes. there are several true moments of genius in this epic film. firstly the subtle manner in which we find out why jean has a european accent and his brother, who looks like slater from saved by the bell, has an american accent. beautiful. secondly the sheer evil of the villain in this motion picture, tong po, makes the film such a winner. imagine if you will general zod from superman 2 with a ponytail and you will have a fair idea of the evil jean must tackle to avenge his pimp moustached, perm-mulleted brother. jean-claude gives one of his best perforamces ever in kickboxer and surely at least deserved an oscar nomination. in terms of performance it matches anything by day-lewis, pacino or de-niro.

but the greatest moment in this film and perhaps in the history of film is the scene in the bar where jean dances. he gets drunk and performs a classic, beautiful and life affirming groove. its all there-the boogle grind, the splits and the random hand claps. you would think you were watching an mc hammer video. i have many times tried to emulate his dancing techniques but have never come close.

so dont delay, add kickboxer to your collection today you wont regret it. if nothing else it will show how high up a gentleman can wear his trousers.

It's a Jean-Claude Van Damme (JCVD) film, so before we start you know it's going to have dodgy acting, a dodgy script and simplistic story, together with a predictable show of his martial arts skills. Yes, the 'Muscles from Brussels' is nothing if not predictable...

Despite all that and despite the somewhat cheesy revenge story, it's quite an enjoyable romp - if you like that kind of thing.

The cheesy story goes: Brother #1 (raised in America) is a US kick boxing champion, goes to Thailand to find some 'real' opposition, and is easily beaten by the brutal local champion and crippled in the process. Perhaps he deserved it for having that moustache? Brother #2 (raised in Europe, hence explaining his Belgian accent) vows revenge, finds an elderly and (of course) eccentric Muay Thai (Thai boxing) instructor, practices by having coconuts dropped on him, having meat tied to his legs and being chased by dogs, his ankles being pulled apart by ropes to improve his leg split skills, felling small trees by kicking with his shins etc etc, and (of course) wins a final contest against the local champion.

It's desperately silly but JCVD does show off his rather fine physique and martial arts skills to good effect and if you can ignore the silliness it's not bad.

[Aside: I rented the DVD copy. The quality is seriously poor and grainy. It is also heavily cut - the BBFC site says the original 1989 film is just under 102min, having already been cut by 1min 17s. The DVD copy is 93min...]