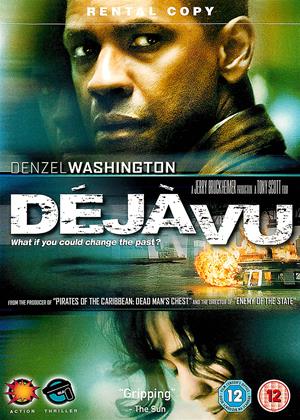 Preposterous but enjoyable - Deja Vu review by Tim from London

I thought the first half of the film was quite promising - it looked as if the film was building up to make some interesting observations about total surveillance and voyeurism. Unfortunately this was directed by Tony Scott - not the most subtle of directors (e.g. child drops doll into the water just before the bomb blast) - and so the second half gets bogged down in a silly time travel story which makes no sense and has been done better elsewhere (eg. Terminator). Not a bad film - and long as you leave your brain at home.

Hmm - What can I say, All Denzel fans will love this - his usual action hero with a soft spot for a lady. The film has a nice concept in its ideas of deja vu and has a good ending too. I enjoyed the fim but my partner fell asleep (very rare he stays awake) and he commented it was slow in places. I however, didn't get bored - I enjoyed it and would recommend to action/ and a bit of sci-fi fans

You probably know the drill by now when this lot gets together – ridiculous and implausible plots, rapid edits, great effects, chases, intrigue, explosions, twists, turns, the lot. I won't go into details of the story, save to say it comes straight out of Hollywood's big plotline slot machine. This time the wheel's have stopped on Terrorism / Cops / Timetravel / Desire.

And I for one loved it, it's absoutely perfect for what it is – a big, loud and frequently laughable ball of cinematic escapism. It's got Denzel Washington in it, doing what he does best, and you even get the enigmatic Jim Caviezel as a bad guy. What more could you want? If Will Smith had got the gig instead of Denzel it would have been awful. Know what I mean?

Denzel Washinton is truly outstanding in this film. The plot is original and its uniqueness exploited well. But many films get that far. To get to the point where you really want to see the film again as soon as you've watched it requires blazingly talented acting. No poor acting anywhere. Some funny bits include an obese policeman trying to fit urgent phone calls around his mouthfuls of cheeseburger.

This is a kind of Bourne chase thriller mixed with time concepts a la back to the future. You kind of needed Doc Brown to come back and explain to you what was going on, or just have another drink and enjoy the rollercoaster ride and it is a big ride. Must have been terrific on the big screen but very enjoyable on DVD.

A really interesting film which starts with a horrific bomb blast set on a mardi gras cruise boat full of servicemen and their families. Denzel Washington is the detective sent to investigate. His dogmatic approach soon unveils some key evidence and he attracts attention from the organisers of an experimental project which can look in on what has happened in the past. I don't get the science myself but am told by those in the know that what was done in the film is theoretically possible (depending on whose theories you listen to!)It is a tense drama, which has you on the edge of your seat for much of the film. There are some plot twists and turns and throughout Denzil puts in a solid and believable performance as the cop who passionately wants to solve the mystery and prevent the slaughter of innocent lives.

Very enjoyable way to spend a Sunday afternoon. This film keeps you guessing and thinking about the past and future and how things effect both! Its a good watch and a very good concept. Scary!

Nice idea,good acting but plot is contradictory and daft.

Made me smile with happy ending tho, (whoops-sorry)

A real mishmash of temporal ideas and a concept with implausible physics and interactions. Despite what other reviewers say, the director, stars etc do not improve on a ridiculously confusing storyline that is not entertaining but actually quite uninteresting and where the viewer is quickly confused and lost as to what is happening 'then' or 'now' - I fast forwarded several times just to get nearer to the end of the film. Watching it, all I could hear in my mind was David Tennant as Dr Who talking about "wibbly wobbly timey wimey" and it not being a straight line with linear cause and effect. Far too clever for its own good and (slightly) better done in the film "Source Code"

What could have been..... - Deja Vu review by CP Customer

Basic Plot: An ATF agent travels back in time to save a woman from being murdered, falling in love with her during the process.

I could go on for days about time travel, time and space, and how going back in the past only sets up your events for going back in the past in the first place (wrap your head around that), because stuff like that interests me. So when I got a grasp of what this movie was all about, I really appreciated it for touching on that subject. Basically, Denzel arrives on the scene of a massive terrorist bombing and gets involved in a unit that discovered a way to bend time and see into the past, trying to find answers. It comes off two ways. There is a lot of depth in what they are trying to convey in Deja Vu, but if you don't really feel like thinking about it, you can just go along for the ride with a pretty good grasp of what is going on. As a movie in general it was alright. It starts out pretty slow, but picks up towards the second half. Denzel Washington plays the cop role he seemingly always plays these days, but I have no complaints. He doesn't really bring anything fresh to the screen though. The rest of the cast is pretty underwhelming, but they get the job done. I was pretty disappointed in Val Kilmer's role. He was almost a non-factor. The story in general is told decently, but I really only appreciated this for the concept itself. Sadly, although the idea was good, it didn't fullfill it's promise and in the end was just another mediocre, run-of-the-mill Hollywood thriller.