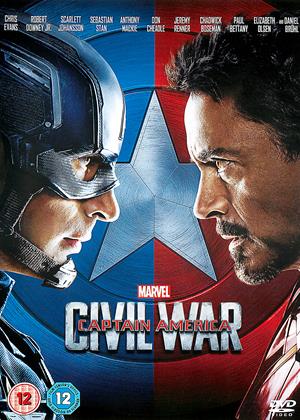 Everyone is invincible - Captain America: Civil War review by NC

Too many cooks and all that. Lots of talking, inter-dispersed with lots of hitting each other. Lots of over-the-top bish-bash-bosh. Individually it can work, but when there are so many super-people at one time.......it gets boring..........

Great film , the U.N. agreed to some rules and control over the destructive justice the superheros dish out . Some sign up to this some don't feeling it's stops them from being able to help quick enough. The ones that sign up to this try to bring the others in line. Great action fight scenes.

If you're given the admittedly improbable task of writing a fashionably dark and edgy superhero movie that isn't so dark and edgy it's no fun, while also having to include far too many established characters as well as introducing a couple of very important new ones, this movie represents pretty much the best way it can possibly be done.

Unlike the similarly-themed "Batman Vs. Superman", almost none of these people are genuinely trying to kill each other, and those that are have truly compelling motives. The main conflict, between Captain America and the much more powerful Iron Man, is between friends who disagree, initially for rather abstract political reasons, but it soon becomes very personal indeed for reasons that neither of them can help. In particular, Captain America, unlike Batman, stands up to literally the whole world because he simply will not abandon a friend, no matter what. As heroic motives go, that's a lot better than "Superman must die because I'm afraid he might go nuts and enslave us all, and by the way, I regularly drink myself to sleep."

The frequent action is ferociously well-handled without ever becoming more than the tiniest token bit bloody, and occurs often enough to prevent the necessary lumps of plot exposition from dragging on for too long. And considering how many people we're supposed to care about in this movie, character development is surprisingly well-handled. New character T'chala, better known as the Black Panther, makes his mark with absolutely no trouble at all, and almost instantly seems to have been there all along. The latest reboot of Spiderman is less successful. He may work just fine in the solo movie we're promised during the closing credits, but here he seems like a young-adult character in an adult-adult film, constantly saying "awesome" because that's the formula the middle-aged scriptwriters know applies to characters under 20, and generally coming across as an immature person Tony Stark really shouldn't be pitting against superheroes who might actually kill him. But that's not a criticism of Tom Holland's performance. Though rebooting Aunt May to the point where I initially thought she was Peter Parker's girlfriend is probably a step too far.

In short, this is one of the best formulaic superheroic movies that will ever be made. But it ultimately fails because however entertaining it may be most of the time, it's always shoving cardboard characters around in ways that set up several sequels. It's absolutely superb of its kind, but there's just too much commercial cynicism to let me truly care about it outside its obvious greed potential.

Too many cooks spoil the broth!! - Captain America: Civil War review by CS

It's quite clear that the scriptwriters are running out ideas and desperately clutching at straws in a woeful attempt at keeping the DC Comic Books franchises alive! Can we please have something new and refreshing instead of continually re-treading the same old already worn out boards! The script is poor, the storyline so convoluted and a real mish mash, that the film keeps going off at different tangents and directions and gets quite confusing at times! Who's who, are they good or bad, what is their role and quite literally, who are you?! There must be at least 15 different main characters in here, far too many to make any sense and the actors are so busy trying to outshine each other, that some, such as Robert Downey Junior, don't even seem to bother! RDJ doesn't really play the part of ironman anymore, he simply seems to play himself and it's all getting a bit tedious, stroppy, in love with themselves actors, playing stroppy in love with themselves characters! Even Spiderman makes an appearance, which really does make complete nonsense of the whole thing! I shan't even bother re-iterating the storyline, as others have already done that, and it's so flimsy and weak anyway. The direction and shooting is atrocious, with the action shots so speeded up, that it's impossible to see what's actually happening! In fact the action scenes are very difficult and uncomfortable to watch because there is far too much CGI and it's all so fast that nothing really registers! All in a classic example of how not to make a movie. Please stick with one or two main characters and give us something that has at east had a little bit of effort put into it. This film seems to be mainly aimed at children and as a marketing opportunity for merchandising and very little else!!

It’s the movie to put the old schoolyard debate to bed: who would win in a fight? Iron Man or Captain America? But let’s cover all the bases. What if Iron Man, War Machine, Black Panther, Black Widow, Vision and Spider Man battled Captain America, Falcon, The Winter Soldier, Scarlet Witch, Hawkeye and Ant-Man? This movie aims to answer that question with a showy set piece in addition to being an intriguing political drama.

At first, I was unsure about another ensemble hero picture. After experiencing the overstuffing of both Avengers: Age of Ultron and Batman v Superman: Dawn of Justice, I wasn’t much looking forward to returning to such a superhero picture formula that tries to throw everything it can at the screen. Just looking at the cast list made me wonder how any of this would be balanced even with a 2½ hour running time. The key lies in the directors Joe and Anthony Russo who proved how flawlessly they can stage characters and fight scenes in Captain America: The Winter Soldier. They’ve done what Joss Whedon and Zack Snyder have failed to do with their uneven hero movies and orchestrate a complex balancing act of new and returning characters amid a plot that takes real chances. I feel much better knowing the future of the Avengers movies are in their hands.

The current state of the Marvel Cinematic Universe finds Steve Rogers/Captain America still on the hunt for his best pal Bucky Barnes who has been brainwashed and robotized to fight for likes of Hydra. It’s a rather difficult task when you’re also pulling Avengers duties to stop the bad guys from stealing dangerous weapons. As if that weren’t enough to hamper his quest for Buck, the Avengers have now come under fire by the United Nations. Tired of the Avengers causing so much destruction with their vigilantism, the UN creates an accord to keep the Avengers under their thumb. For Tony Stark/Iron Man, the signing of the accord is the easiest of decisions with his PSTD and tremendous guilt complex. Some of the Avengers agree as they believe they have too much power not to be kept in check. Other Avengers do not as they believe this will hinder their ability to protect the world from the likes of secret armies and invading aliens. The ones that disagree with the accord align with Captain America’s rogue force determined to deprogram Bucky before the Avengers/governments can have their way with him.

The directing Russo brothers manage to add a grand dose of excitement and surprise to the superhero genre once again. The action scenes are far more than just a series of explosions as our heroes spend more time fighting hand-to-hand than with guns and energy blasts from a distance. For a movie that boasts flying robots, shrinking men and otherworldly beings firing lasers out of their foreheads, most of these practical stunts are rather impressive. One particular fight/chase scene with Captain America, Bucky Barnes and Black Panther becomes a fantastic sequence of punches, falls, jumps and kicks that extend all the way into traffic. Whereas most of the action in these Marvel movies seems to have become standard, Civil War reminds us all about how cool it is to watch stunts that carry weight.

The arc of Captain America’s distrust versus Iron Man’s paranoia would be enough for the script, but I was astonished at how well the B-plot arcs held up. Scarlet Witch struggles to come to terms with her own powers while Vision attempts the monumental task of living among humans with both of their concerns colliding into each other. Newcomer Black Panther has one of the most speedy, but fully realized arcs in the picture as he is consumed by revenge to become a costumed vigilante. Even Spider Man, for the brief amount of time he has on screen, is developed enough where he could easily slide into his own solo picture without the need for yet another origin story. The only character we don’t seem to have much time for in the movie is Zemo, an ex-HYDRA agent who seeks to bring down the Avengers by making them destroy each other. Though relegated as a behind-the-scenes mastermind of evil, it was refreshing to see such a secretive villain pull off such an ingenious plan without the need for costumes, robots, armies or blue lasers.

Finally, Civil War achieves the most impressive feat of all with the juggling of multiple tones. This is certainly one of the more darker Marvel Cinematic Universe movies (if not the darkest), but also one of the most fun. When Captain America and Iron Man trade words and fists, they’re fighting with personal regrets and rage. Their battle isn’t so much orchestrated by a villain as it is the true feelings that have been brewing over the course of several movies. But just in case things get too murky, there’s a fantastic airport battle of heroes that a sensational mix of special effects and banter that has achieved that rare feeling of the comic books.

Captain America: Civil War crams so much in and makes it all work so well at a brisk pace that it took me a while to gather my thoughts for this review. It’s hard to rank on the current scale of whether or not it topples the Russo brothers’ stellar Captain America: The Winter Soldier. If not better, it’s at least as good and is certainly one of the best Avengers movies for not being titled as one.