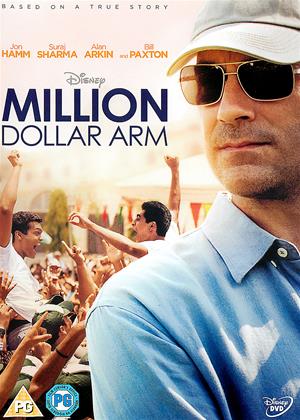 I am not an athlete. I played team sports in school, but it was not something I was passionate about, nor particularly skilled in. That being said, for some reason, I find myself drawn to sports films; and this is my kind of sport film. Like the series Friday Night Lights, Million Dollar Arm is a sports film that is not about sports. The film is based on true events, which I hadn’t heard about before. The story is quite simple, but enjoyable.

Disney’s Million Dollar Arm is the story of sport, triumph, and unity. JB Bernstein (Jon Hamm) was a successful sports agent. He worked because he loved what he did, and he had a good time doing it. That is, until the playing field became a lot less fair and even. Faced with the prospect of losing his business, JB searches for any way to save it, and finds it: cricket. JB and his partner head to Mumbai, and come back with two eighteen-year-old boys with throws that can knock the breath out of you. Will this be enough to save JB’s business? Is baseball ready for a change? And will these boys get signed to a major league team?

I will begin by saying how good the acting was in this film. The lead - Jon Hamm, who shot to fame from the series Mad Men - definitely plays a different character, and is a likeable leading man. The Indian teenagers are also brilliantly acted by Madhur Mittal and Suraj Sharma. They have both acted before, but do not have extensive film backgrounds. It was not particularly surprising for them to be able to hold their own, as recent films like 12 Years a Slave and Captain Phillips have shown that Hollywood casting is pretty spot-on, even for those that haven’t acted much before.

The story and script was also engaging. There were some very funny moments and lines were delivered seamlessly. There were no visual effects or special camera movements; just a good story.

I also like their mix of cultures. There have been a recent slew of American/Indian films - mainly starting with the roaring success of Slumdog Millionaire, and continuing with The Best Exotic Marigold Hotel and The Hundred-Foot Journey - and it seems to be working well.

Reviews have been mostly positive. I would be surprised if they won any major awards, but it does what it sets out to do - educate and entertain. For the most part, the criticisms have claimed that Disney dulled the story down for a younger audience, and that India was only shown from a ‘tourist’s-eye’, such as disregarding the very low-income areas. But in defence of the film, I don’t think they needed to give a history of India just to have characters come from there.

You might not want to bring little kids, because it does contain some swearing, but otherwise, I think most people will enjoy it.