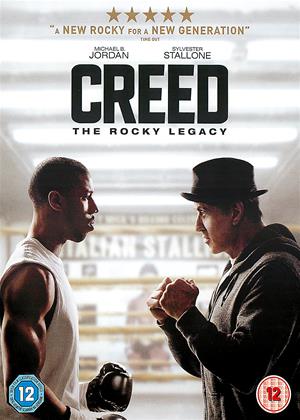 Rocky returns as the trainer of Apollo Creed's illegitimate son. Reluctant at first to Adonis's (yea of course Apollo's boy has got to have cool name too) pleas, Rocky comes on board. Same trusted format, training, then get shot as an underdog, it works again here though. Nice performance from Tessa Thompson as the love interest to Adonis, who is also well played by Michael B Jordan.

But the film belongs to Sly. When watching his performance, especially with the emotional scenes, I thought to myself this is the best I've seen him act (and I'm a huge fan of his work). This was confirmed to me, which I didn't know at the time, when I seen he had received the nod from the academy. Go Rocky, get that Oscar.

I’ve always been a big fan of the classic Rocky movies and was worried about watching this. However, the film is a real triumph and sits perfectly alongside the others. It had great little touches that tied in with the rocky movies without overdoing it, to ensure that it was it’s own film. Acting great, storyline great and that classic ‘rocky film’ build up to a great crescendo was as good as ever. There was even one part in the film that made me emotional when those Creed trunks came out. A great film!

Very good story and good acting. This time Rocky is the coach and trainer to Apollo Creeds son who is an upcoming boxer. The story was well told . At first i thought not another one , but I was pleasantly surprised with how good it was.

The Rocky franchise is given the soft reboot it so rightfully deserves. The Italian Stallion passes the torch onto the young and determined son of Apollo. You may recall him being Rocky’s nemesis, then his pal and finally meeting his end at the gloved fists of Ivan Drago in Rocky IV. It’s rather amusing how Apollo’s death in the ring is recognized, but never fully addressed in much detail. I guess the image of Apollo meeting his end in an Uncle Sam costume while being beaten to death by a comically oversized Russian just doesn’t fit the tone of Creed.

After all, this is a picture that wants to bring Rocky back to its roots as an engaging underdog tale. Michael B. Jordan plays Adonis “Donnie” Johnson, the love-child of Apollo, a plucky enough youth with mountains to climb and determination to bound over them. He wants to be a boxer desperately, but his mother forbids another bloodied athlete in the family. It’s up to Donnie to set out on this path without her blessing. But he’s not alone when he tracks down the legendary Rocky, reprised by Sylvester Stallone, now running an Italian restaurant. Donnie pushes and prods him by citing his boxing history and begging for pointers. Rocky, now an older and more grizzled former boxer, eventually comes around to training the young boxer to be the best. Cue the montage and personal challenges to be the best boxer around. Just leave the soundtrack by Europe at the door.

Creed follows the same formula as the original Rocky by building up the young boxer from the streets to the arena. Thankfully, it keeps all the tone and none of the redundancies of the original thanks to the skillful direction of Ryan Cooper. He doesn’t turn Michael B. Jordan into Rocky junior by giving him some originality. Donnie must rise not just above greater fighters, but also the identity of being Creed’s son. His opponent for the picture, Ricky Conlan (Tony Bellew), constantly gets under his skin by bringing up his father and referring to him as Little Creed. His love interest, Bianca (Tessa Thompson), is an aspiring songwriter that warms up to him before she discovers his lineage (or his trainer). And his mother, Mary Anne (Phylicia Rashad), slowly comes around to supporting her son, but only as much as a strong woman can handle dealing with watching the men in her life become brutalized in a ring.

There’s a finely tuned nature to the way Ryan Coogler directs Creed. Every scene feels just long enough to find the right tone, the right thrill and the right joke. That fat is trimmed as the picture is edited down to the most juicy bits we want to see out of a boxing moving. He may not completely lift off the old ground that the Rocky franchise rose from, but he does spruce it up with plenty of skill and smarts to be a film that can stand well alongside Rocky and on its own. Coogler, much like the film’s protagonist, is young and full of potential - eager and determined to bring it all out on screen.

Earlier this year, I saw the movie Southpaw and remarked how if you’ve seen one boxing movie you’ve seen them all. Creed, too, presents a story we’ve heard before, but never has it been told with such pluck and craft that makes you buy into the scenario. It’s a picture that’s sure to please the boxing movie fans that have seen it all and the newcomers who have seen none of it. Michael B. Jordan has all the right moves to continue on as a character worth rooting for should a sequel be on the table. Just make sure he stays away from the Uncle Sam suit and he’ll be fine.