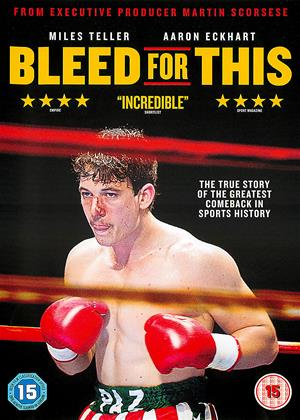 Reviews (3) of Bleed for This

Excuse the pun, but this film knocked me out. Miles Teller is brilliant as the hard as nails Vinny Pazienza. Who becomes even harder when faced with everybody telling him it's over after a serious car crash that breaks his neck, refusing to lay down.

This film shows the man in the fight and the fight in the man simultaneously. Aaron Eckhart also plays a tremendous role as the trainer Kevin Rooney and there is great camaraderie and banter between the duo.

The film brilliantly captured the cut throat world of pro boxing too.

A real great and inspirational film.

Miles Teller is great in a film that left me wanting to know more... - Bleed for This review by TB

The boxing/fighting move has in many ways become a right of passage for any actor who wants to make an statement and signal their commitment to hard graft and the training for the role. Robert De Niro, Sylvester Stallone, Tom Hardy and even Daniel Day-Lewis have all made their mark in this genre, even though sometimes the results are mixed.

But because so many people have made what is effectively the same film over the years, the boxing film has more clichés than pretty much any other genre. And this to me is the biggest problem facing Bleed for This. This is a true and absolutely incredible story, often called the greatest sporting comeback of all time. And it deserves to be able to tell it's story. But because of how bloated the genre is, there is no doubt that every one of those troupes would have to be used to tell it, leading people to say "They stole that from Rocky," or "I've seen this before so many times." Bleed for This should have been made 10 or even 15 years ago and would have been able to potentially a lot more of this story.

But having said that, nothing should stop you watching this film for the performance of Miles Teller. A actor who is fast maturing into one of the best people working today in the films, he gives the film an electricity and audaciousness, making you really care about Vinny Paz and his difficulties and eventual triumphs, both in and outside of the ring. Aaron Eckhart is also great as the washed-up trainer, at first horrified by what his pupil is wanting to do before realising this is the redemption both of them need.

The only frustration of this film, as I alluded to earlier, is that it is far too short and leaves out a lot of what was undoubtedly critical to the recovery of Paz.

Finally, the biggest disappointment of all was the lack of special features on the Blu-Ray. 2 short clips of promotional video, both under 3 minutes in length, giving the absolute bare bones on how the film was made, including only interviewing Vinny Paz for around 90 seconds about the film of his life story.... Very poor

Out for the count - Bleed for This review by JR

There's been a lot of great boxing movies Raging bull,Rocky,Rocky 4 and Creed..sadly this isn't one of them.

Bleed for This review by Adrijan Arsovski - Cinema Paradiso

Poignant and adroit in its own sense of merit – Bleed for This is an unforgettable theater release that will shake the hearts and minds of many. It tells the story of Vinny Pazienza (played by Miles Teller) in an atypical underdog-turned-champion fashion with a twist in the middle. It’s beautifully shot, carefully edited and composed to near perfection, which along with Teller’s convincing performance, amounts to a slice of cinema that everyone should go and see (especially true for aspiring sportsmen and people who need a general motivational boost).

Bleed for This follows Rhode Island-born boxing champion Vinny Paz through his trials and tribulations, and shows how a person can stand up against life circumstances with the right state of mind. That isn’t to say that director Ben Younger’s piece is preachy: its message lies scattered among the many fails Vinny will experience during his professional boxing career.

As Vinny progresses through the many fights he wins, he is still not satisfied with his training regimen and most of all – his trainer. Afterwards, after a heated argument with his manager Lou Duva (played by Ted Levine), Vinny gets acquainted with a new trainer called Kevin Rooney (Aaron Eckhart) – who in turn has been working and subsequently been fired by none other than Mike Tyson. Kevin decides to bump up Vinny Paz and his tactics prove successful after his protégé manages to snatch yet another title – this time in the Light Middleweight category.

Unfortunately, as all things in life, Vinny’s advances end up by a sudden accident from outside the ring. He suffers a serious injury and word is he may not even walk again for the rest of his life. For a film of this caliber, it’s expected that such turn of events would not stop our protagonist, and so he starts recovery sooner than what everyone anticipated. The fighting gods are pleased.

Bleed for This features great writing, courtesy of both director and scribe Ben Younger, and cinematography even Stallone’s Rocky to be jealous of. Furthermore, it shows how the actors try to give their best and most of the time, they succeed in doing so. Among Miles Teller, another big standout is Ted Levine, who comes off super hard and gives that authoritative mentor vibe that scares everyone in its wake. Katey Segal as Pazienza’s mother basically melts together with her given role.

Despite several sports clichés, Bleed for This is by no means a naïve flick and will most certainly stoically stand against the upcoming ravages of time. One of the brighter spots among countless other archetypal motivational-nonsense that pollutes the drawers of the movie industry.