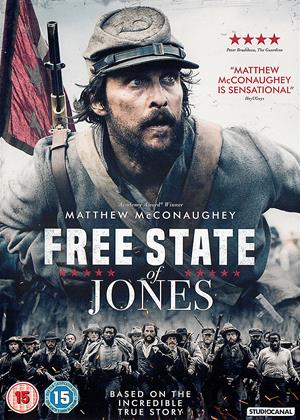 Reviews (6) of Free State of Jones

Both a wonderful drama and a fascinating insight into a little known aspect of the American civil war. Tells a true story with conviction and sympathy.

This film is good in parts, but as a whole it is a real mess. It's as if the writer/director wanted to squeeze in everything, and the end result falls between two stools - it's half story half documentary.

And the inexplicable decision of the director to just randomly chuck in scenes from a 20th century courtroom in the South re mixed marriage and race laws is just plain wrong - the worst editing of a movie I think I have ever seen.

So get rid of these scenes and the more documentary bits, but out half an hour and you may have a cohesive movie - but this is not it.

It's a fascinating story I had never heard of before. So I would rather have seen a documentary on it really, rather than a film like this which occasionally veers into drama-documentary territory.

This is way too long. A shame really as the story deserved better.

Really good story and very well told , of a rebellion of the civil war that started an uprising that in time created a free state.

A very good film. It captured my imagination in that whole period of time in American history. MC is an actor that I can watch again & again.

The only thing that would have improved this would have been a greater focus on the modern day legal story that gives the film its context. But that would have required either a longer movie or dropping some stuff. And neother would be a good idea.

Great cinematography. Great acting especially from McConaughy. He is a fine actor and one of the good guys I think.

Another war vicar - Free State of Jones review by NC

American civil war was very bloody and very nasty. As not really interested in the detail, yet another blood and guts semi-doc war film is not on my must-do list.

Got it as Mc Con can do some interesting projects. As it goes, is probably pretty good war film, but not bothered to watch it all through...........

Free State of Jones sees McConaughey ‘driving’ through one of probably his most prominent roles in the past decade or so, where he assumes the antics of Newton Knight – a heavy Civil War opponent who forms his own band of brothers to fight for a cause not commonly shared among the ranks of the then Confederate government. In regard to a period drama, Free State of Jones succeeds; in regard to a film experience, it is only just good enough.

Director Gary Ross’ piece is an authentic period drama that enamors progressive thinking in circumstances where such free state of mind is just not permitted. For a history film though, Free State of Jones goes far to show its attention to detail, and sheds light using an objective approach to a sensitive subject, i.e. slavery. Insofar slavery goes, the feature has no bias toward it; it is free from questionable morality , metaphors and complex analogies: instead, it hits right where it hurts, and oh boy does it hurt.

The film assumes the stances of Newton Knight, a controversial historical figure who divides Holiday tables to this day. Such is the case with the movie also, which delves deep into HOW Knight acts, not WHY it does so. Add up the convincing Matthew McConaughey performance and you have a complete, complex character filling the screen in front of you. To an extent, this would be probably the best McConaughey has done in years.

Despite its heavy subject, Free State of Jones comes off as very entertaining film, both as a technical achievement and a character study. Mahershala Ali and Gugu Mbatha-Raw are two very promising actors who actually deliver more than what I initially expected from the duo. Cinematography is brilliant, while the music, in all its glory is but a thread which guides the whole experience forward, and seamlessly builds upon the film’s structure to finally produce a worthy picture of both visuals and sounds.

As far as story goes, Free State of Jones is an example of what exactly to do without trying too hard, just enough to please audiences, and not a single addition to provide that ‘awe’ we some much expect from movies nowadays. At one point, I’m sure we’ll stop caring altogether.

Now, the pacing is somewhat off. Either the film drags out at time, or certain phenomenal scenes end prematurely. Whether or not this is the directors, the editors or some other one’s fault, I will choose not to disclose.

To conclude, Free State of Jones is a worthy experience of a film, which could’ve been great, but due to clumsy editing it falls just short. Nevertheless, I highly recommend it – especially true for history buffs and people very much fond of all things old.