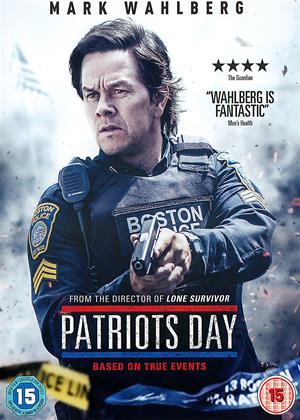 I enjoyed watching this film , but very sad that its based on events that happend to innocent people .

This is the sort of film aimed at making an audience cry - and it's full of male characters crying too, which is a very American fashion now.

It is an emo-fest really - telling the story (based on truth but how much so?) of the Boston bombing in which 3 people died.

Well, 3 innocent people killed and everyone hugs and cries and makes a movie about it. BUT how many people get shot dead every single week in the USA eh? I couldn't help thinking that when watching this.

The constant forcing of emotion through the film annoyed me greatly - all group hugs and man tears. Makes me wonder how we ever won the war (that's WWII actually). London endured 3 months of bombing from September 1940 every single night and 50,000 people died. Compare and contrast with this relatively minor event.

If you life self help manuals and group hugs, and like a good cry, then you'll like wallowing in this.

I did like the scenes hunting the terrorists and the interview with the suspect's wife - and women play a HUGE role in all these terrorist attacks actually, something feminists constantly want to deny as they blame men.

No spoilers because you should already know this story.

The first part of the movie I found difficult to watch because it shows real life-changing suffering.

But it's necessary so we can see the second part of the story, catching the villains, which was easier to watch.

The story is played out through the eyes of a police officer right in the middle of the event and then in identifying and catching the perpetrators.

A good film that shows us there are real villains in the world and real heroes to challenge and defeat them.

This is a film overawed by its subject matter – the 2013 Boston marathon bombing – and its need to pay homage to the heroes and victims. It’s more of a commemoration to Boston and its inhabitants than it is a feature film. The first half is awful, totally unfocussed and filled with banal backstory snippets and newsreel-type depiction of the marathon and the bombing chaos itself. It plays like Act 1 of a 70s disaster movie.

The characters’ real-life counterparts appear on camera themselves at the end of the film and provide moving testimony, but their on-screen portrayal is sketchy and mawkish. They say ‘I love you’ over and over again to plinky-plonk piano muzak you just want to stop. The score, by the normally brilliant Trent Reznor and Atticus Ross, is terrible.

But just when you think the film will never be anything but a drawn-out news bulletin, it changes tack and gathers momentum. The second hour develops into the search for the bombers and, as a piece of thrilling cinema, it starts to grab the attention. Director Peter Berg is at his best when he’s able to focus on these more contained confrontations and milk them for tension and thrills, as he did in Lone Survivor.

There are some exciting incidents that almost save the film, but then it returns to the mawkishness with which it began. American critics like this film, as they did Berg’s similar Deepwater Horizon, but they’re judging the concept rather than what’s on-screen. Perhaps it’s best viewed in this light, as a well-intentioned commemoration of a tragic event, its heroes and victims and even the city of Boston itself.

Whilst I found this quite an interesting film to watch, entertaining given the subject matter, it is not! This is in essence a slightly fictionalised account, based upon true events, of the 2013 Boston Marathon Bombing, blending real life shots into the film at various points. the problem with American Films of this type is that they tend to glorify and revel in Americanisation and how wonderful it is to be a patriotic American, rather than concentrating on the facts, the reason why this happened and what actually happened! It can be hard sometimes for non-Americans to have the same empathy towards such tragic events when they happen in America, give the funding and support the USA notoriously have given terrorist groups such as the IRA over the years! As a result the American viewpoint on terrorism becomes slightly skewed, as it does so in this film. Giving credit where to is due though, this is quite a tough and gritty drama which is well played generally, although I would say the real heroes in this case were the general public rather than the Police themselves!

A brilliant reconstruction of a terrorist event which was then horrifying but by now seems almost tame compared to subsequent attacks in Europe. At times it seemed we were actually on the spot.

Simply too much drawn out boring dialogue , muttered as is now common practice - are they using the mighty Iphone to do the sound recording ? Totally uninteresting characters and their average lives. Tried to make a drama out of a terror attack and failed. Also , what possessed them to film the final shootout in the dark ? all that you could see was gunshot flashes , seemingly small explosions and ghost like figures running across the screen !!! Since most of the " drama " was made up why couldn't they pretend the shoot out was at dawn.

Lets be honest , you sit through 90 + minutes of tosh hoping to see the terrorist die in a hail of bullets and what do you get - bonfire night.

After Deep Water Horizon I was hoping for some realistic action with the manhunt but all I got was Emmerdale. Avoid.

I wasn't sure I'd like this, after knowing what had happened at the time the event actually too place. The films sets you up nicely from the start and it's quite alarming as the film progresses and, from a UK point of view, how violent the gun battle becomes at a certain point in the film. It's of course sad that this event actually happened, but it's well worth watching.

The trouble with these kinds of movies pertaining to recent tragedies that negatively affect public interests is that it’s almost impossible to objectively judge the film itself whist distanced from the real-world event the film’s based upon. With that in mind, Patriots Day is a decent film that unfortunately does not fulfill its full potential like, say, Oliver Stone’s JFK did some years back. To this extent, Patriots Day is a good rendition, a solid try, but an ultimate miss of a story that could’ve been explored bigger, better, and deeper as opposed to the finished product audiences got in the end.

Patriots day is directed by Peter Berg and stars Mark Wahlberg, John Goodman, Michelle Monaghan, and others. The film heavily draws from several police officers’ experiences at the exact days the bombs went off (Boston Marathon Bombings) and merges these experiences into Wahlberg’s Tommy Saunders – an uncompromising, tough police officer with clear ideals and a special knack for justice. Which tells just one side of the whole story.

The second part of the story is inevitably the people who committed the crimes, i.e. bombings. As shown in the film, these individuals are not some faceless antagonists who want to do bad just for the sake of it, but rather people with names, surnames, and their own personal agendas and underlying causes as well. But as we come to learn, sometimes even the noblest of intentions (however disillusioned they may be) can harm the well-being of others, of innocents.

Patriots Day falters in many respects, with the main one being the overt-dramatization and bloating of everyday events that are as boring as buying a carton of milk. And because the film itself has to appeal to a certain audience in order to sell, the team behind it did everything in their power to inflate certain events and even come up with nonexistent ones in order to achieve that “bigger than life” feel that just doesn’t work as well as they envisioned it. The story of the 2013 bombing marathon is just too recent to transform it into a compelling thriller. In fact, where Edward Snowden’s Citizenfour succeeds, Patriots Day falters, mainly because it’s shot as a TV flick whereas it would’ve worked better if it’d received the documentary treatment instead. But alas, it wasn’t meant to be: the tentacles of Hollywood probe deep, expand and contract at their own leisure, and hold little regard for what audiences actually want to see VS what they THINK audiences should see. It’s like a self-fulfilling prophecy of doom: what people say they like usually turns the other way around when all is said and done.

Finally, Patriots Day is a decent film depicting recent history the way the United States sees it, and this is perfectly fine as long as you’re a citizen of Uncle Sam’s.