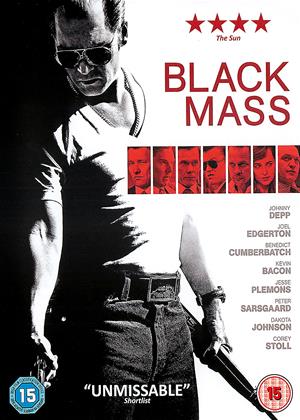 This fact-based tale of an "unholy pact" between a professional criminal and an FBI agent (hence the peculiar title, which is never referenced in any way in the film itself, but it was the name of the best-selling book the film was adapted from, so they were stuck with it) tries so hard to be the new "Goodfellas" that one scene is blatantly Johnny Depp's attempt to match Joe Pesci's "funny guy" speech. Unfortunately, despite a potentially fascinating story, and the kind of performance from Depp that made him famous in the first place, before he got rich and lazy playing the stars of movies based on Disneyland rides, it doesn't quite work.

Depp's Whitey Bulger, who resembles Christopher Walken so much that I wondered why they didn't just hire him and save a lot of money on prosthetic make-up, is a magnificently reptilian larger-than-life villain, especially in the scenes where he does Very Bad Things, but he's never entirely convincing as a human being, which matters in a film that's supposed to be about real people. Also, the fierce loyalty that exists between several characters because they grew up together is constantly and clumsily mentioned, but that's both far less effective and far less believable than showing us the backstory like Scorsese did.

And, like most other films that want to be "Goodfellas", the movie is so determined to show us crime doesn't pay that absolutely nobody has any fun. Every moment of joy or normality is a brief prelude to at best heartache, more likely tragedy, and most probably somebody getting brutally murdered. Men who supposedly control vast criminal empires and must be making millions every year have the lifestyles of blue collar workers on their day off, which hardly seems worth the downside of living in constant fear of being unexpectedly shot in the head by your psycho boss. Even the FBI agents all seem to dislike each other intensely and are almost permanently miserable, because some of them are crooked too, and Crime Does Not Pay!

Ultimately this is an overly ambitious film which doesn't entirely come off. It may be more truthful than the epic tragedy of the Corleone family, but this glum saga of men who do dreadful things because they're greedy hypocrites or have something seriously wrong with their brains ends up being too depressing for its own good. And it's certainly a mistake to have the entire movie revolve around a performance which belongs in a film where everything is larger than life. Whitey Bulger is a spectacularly terrifying presence, but he overshadows the rest of the cast to the point where I sometimes had trouble remembering which of the other bad guys was which. And on a purely practical note, there aren't that many A-list actors with natural Irish American accents, so in a film where absolutely everybody is required to have one, the results are inevitably going to be patchy. In particular, Benedict Cumberbatch, who is neither Irish nor American, seemed to be struggling.

Powerful picture but confusing start.Did not explain how he was head of the gang & who was killing who.I did not recognise Johnny Depp at first.True story which got better

later but not the best gangster film.Look on Wickapedia for his assasination.