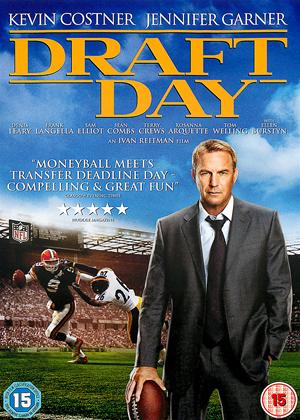 Kevin Costner is back, and he has picked an excellent project for his return. Draft Day balances the line between sport and drama, and manages to keep both sides happy and entertained. Don’t worry if you do not know much about American football, the sport vernacular is not too complex, and it is viewable by a wide audience.

The story follows Sonny Weaver Jr. (Costner), who has quite a load on his shoulders. His girlfriend (Jennifer Garner) is pregnant with their first child; he has fired his father, who then died; and he is torn between the draft pick he is expected to make, and that which he feels in his heart. Will he choose the obvious choice? Or will he take a chance on the underdog, step out from his father’s former shadow, and make a name for himself?

There has not been much talk of this film, so I was surprised to find it quite interesting. When it comes to films with these mixed themes, it is important for there to be a good balance between the general story drama, and the sports action. It is something that has been done so well in the 2000 film Remember the Titans, and the TV show Friday Night Lights (2006 to 2011). Of course people want to watch the game, but it is the connection to the characters that makes them care. There are times when the story can become stale because, after all, it is not a real team that we are seeing constructed. Team spirit is such a strong element in sport, and is why something so dull as trading business is so enthralling during the NFL draft. Without this important element of allegiance to a player or team, it is harder to make the audience care.

The acting pool is also quite deep. I was perhaps one of the few that liked Waterworld (1995), so I knew that Costner could carry a film, but it was the female characters that entertained me the most. Garner and Ellen Burstyn (who plays Costner’s mother Barb Weaver) were compelling and really added to the non-sport parts of the film. Barb was witty and lightened some scenes. She expertly delivered her dialogue, and the other actors (including Terry Crews, Dennis Leary, and Smallville’s Tom Welling) were right on par with her.

Director Ivan Reitman (who has directed predominately drama/comedy films) also made some interesting visual effect choices. There are going to be some who watch this movie who are not much of a sports fan, so this will help to keep them entertained. It is also just cool to see this experimentation with visuals in a non-sci-fi and fantasy film.

For the most part, the reception has been pretty positive. Kevin Costner has not always been the most popular actor, and though I do not think this will be a multiple award winner, it is definitely a good watch.