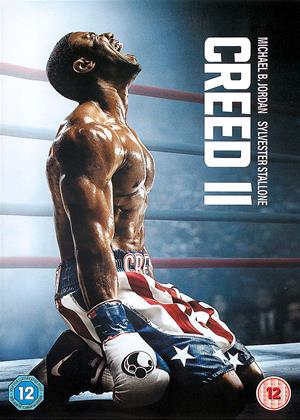 Predictable, by the numbers. - Creed II review by CS

We rented this because of its good reviews but while the fight scenes have clearly been choreographed with care the narrative arc of crisis to success has been overdone in this franchise. For fans of Rocky and the Creed reboot it may be enough to see the same story played out with variations in pitch, tone and character, but for anyone wanting something fresh which promised new directions to traditional scenarios this was disappointing.

Someone has taken the scripts of Rocky 2, 3 and 4, then put them all together in a blender. No surprise to see that Sylvester Stallone was heavily involved in the production as well as starring. OK for an evenings mindless entertainment, but it felt like a long two hours with little feeling of excitement or involvement.

I enjoyed the first Creed film and had been excited about this sequel. When the film started I instantly recognized Dolph and thought, this is going to be amazing! How disappointed was I!?!? It was a terrible film. They blended a few of the original Rocky films together with the same formula and made a very predictable film.

I could have forgiven this if it were not for the emphasis they put on the female lead...she was awful and completely spoiled the film. They seem to place as much emphasis on her as Creed himself...I thought this was a boxing film!

I defy any Rocky fans to watch this film and not be left with their mouth gaping when she leads him out to the ring in Russia whilst singing.....absolutely ridiculous!!! It's as incredulous as the thought of Adrian walking Rocky down to the ring for his fight against Clubba Lang.

It's such a shame because with Dolphs return they could have done something really gritty and special with this film. Opportunity lost.

No more Creed films for me.

Not as good as the first Creed film but still a worthy watch.

The story is a rather predictable one (aren’t they all) but it ties in nicely with the others and delivers on that front yet again.

I did love his ring entrance also!!

Is Adonis Creed capable of not only filling the boots of boxer Apollo Creed but also carrying on the Rocky franchise as a new spin-off? The first film proved that the character of Adonis, played by Michael B. Jordan, was certainly capable of delivering a powerful performance. Creed II, however, showcases that he’s ready for the simpler Rocky sequels that are unfortunate to see the Creed saga slide into. Rather than building heavier on the boxer’s personality, the film merely beefs up the familiar Rocky elements we expect. Bold as they may be, they don’t exactly inspire confidence for the future as this fierce boxer tale plays itself safe.

This is every bit the predictable sequel to craft a good-not-great return. Adonis has become a champion of boxing and is looking to go further with his girlfriend Bianca (Tessa Thompson). But since their relationship breezes over many milestones, the friendship of Adonis and Rocky (Sylvester Stallone) carries more depth. Even though the film has its rather tender moments of connection between Adonis and Bianca, the student-mentor dynamic carries extra warmth. Sure, Rocky gives the kids pointers in the ring but also in life. These scenes are the more charming, the way Rocky eases Adonis’ mind when getting ready to propose and helping him savor the moment when his first kid is born.

The big match the movie is leading up to draws back from the well of nostalgia. Remember Ivan Drago from Rocky IV, the Russian giant of a boxer who literally killed Adonis’ father Apollo in the ring? Well, he’s back with Dolph Lundgren reprising the role and he hasn’t forgotten about that fight three decades ago. He has been shamed for his defeat, his country spitting on him and his wife leaving him. No, really, his life wife him over losing the fight. And she apparently left behind her son, Viktor, who Ivan trains to (what else?) beat Rocky in the ring. Sorry, Rocky’s protoge. And so Adonis has the opportunity to avenge his father, even though Rocky stresses that the kid should only fight for himself and nobody else.

More effort has been placed in Creed II to make it a typical Rocky movie rather than carving out something new from the bolder beginnings of the first Creed. All efforts of drama outside the ring come off as the mere set dressing for the main event. And that’s rather depressing to say with such interesting aspects as Adonis worried about his first child and Rocky about connecting with his own family. There’s some good stuff there; even the Drago lore has some appeal for as odd as it is presented. But we lose track of all this, including the narrative spinning Buddy (Russell Hornsby) and the powerfully domineering mother of Creed, Mary Anne (Phylicia Rashad). And, wow, was it a shame that Phylicia Rashad isn’t better showcased in this picture given how she eats her scenes up with a spoon.

But I’m sure most viewers are not coming to this film to watch Rashad be a badass of a mom. They came for the fight of Creed versus Drago and they’re certainly going to get it. After staging the expected training montages of pushing the two competitors to the limit, the matches are big and loud, every punch feeling like a thunderous blow that really makes one wince along with the broken noses and cracked ribs. It’s an exciting experience but more because of how director Steven Caple, Jr. amps up the audience more with the production than the story woven up to the big bout.

Creed II is a mostly satisfying sequel that would win me back every now and then, though never being full as engaging and inspiring as the first film. While the first Creed was a strong picture that can be hard to follow up on, this sequel, unfortunately, doesn’t inspire much confidence for future films in this saga, hopefully not sputtering down the Rocky sequel route. It’s a crowd-pleaser for sure but no more than any other well-staged boxing movie. And I know Adonis Creed has a far more interesting story past how hard he can throw a punch.