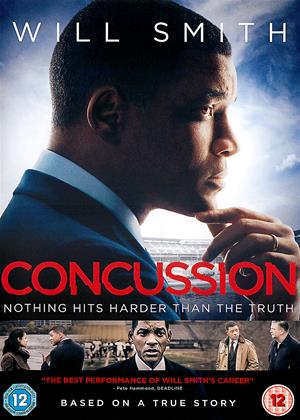 Another true story worth a look - Concussion review by MD

The worst thing about this film is that you've seen the formula many times already, the David v. Goliath true story a la "Erin Brockovich", "Schindler's List", "The Insider", etc. The second worst thing is that it is about American Football, hardly a riveting topic for most Brits.

Hopefully, you can ignore these two things, because if you do actually watch it, it is a great story, a very well scripted and clear, straightforward account of a little known scandal. Will Smith is the star, and he does a pretty good job of trying to break out of his usual style of role, but the great thing is you never think of him as the big Hollywood star in this film. It is an ensemble piece filled with good performances by a very mixed cast of lesser lights. Most notably, it is not all sweetness and light, and the ending is very poignant indeed.

I was engrossed throughout, and glad I decided to rent it despite mixed critics' reviews. Interestingly, after I had seen it I got my wife to watch it too, and she then recommended it to her dad and another friend. ALL of them were very positive in their reaction. That must say something!

OK but lacking something - Concussion review by AB

Knowing the sport from many years of following it, it comes as no surprise that brain injuries are prevalent in NFL players - very much along the lines of what is being discussed in rugby at the moment (2017). Low-key film with solid performances but I would have liked a little bit more science to have been part of the film, to help explain what was actually being talked about.

Typical big-business response about it all, especially the facts and the revelations as part of the end credits.

My partner found this ok in view of the subject matter. I do like Will Smith so we both enjoyed it. A fair rating given as could be just that bit more interesting.

Knocked Out By Will - Concussion review by SD

Given that the central theme focuses around American football I feared the worse. I needn't have worried.

This could have centred around most physical sports i.e. boxing, rugby etc. yet the path to discover CTE (brain trauma) is led brilliantly by Will Smith and director, Peter Landesman.

Yes it is a David v Goliath battle but the performances from the cast incl Alec Baldwin draws the audience in and ultimately compelling.

Concussion takes aim at the very scary suppression of science within the National Football League. Too big to fail and too detrimental to ignore, the NFL attempted to silence the work of Doctor Bennet Omalu for what he discovered as a serious brain injury from American football. It’s a very serious issue that warrants much attention and discussion. The only problem is that it’s an ongoing issue which gives the film an uneasy ending for an incomplete story.

It’s only through the performances that holds together this blunt narrative. Will Smith portrays Doctor Omalu with a great deal of emotion and faith in both his work and the American science community. He’s calmly joyed that his work will provide for his wife and he’s passionately committed to defend his research. Even when the FBI threaten and bully Omalu into dropping his findings, Smith has an angry dedication to find the best option for making his research public. Co-starring is Albert Brooks as his usual likable self in the role of Doctor Cyril Wecht and Alec Baldwin delivering another stoic performance as Doctor Julian Bailes. When the three coordinate their tactics or savor a drink together over lost legal battles, it’s fun to watch.

The film’s purpose is to stir up anger, but perhaps on too base of a level. One scene in particular encapsulates the entire film when Omalu meets with a doctor inside the NFL. The doctor rants and raves about how if the NFL were forced to change its way, the American economy and culture would tumble violently. Omalu remains firm as he points his finger and demands that the truth be told. The truth will be told, but how it will be handled remains to be seen.

The rest of the story focusses on the more personal aspects of Omalu’s life, the bully tactics of the NFL and issues of the players affected by this diagnosis. The football players suffering from crucial mental problems would seem to be a key focal point for drama, but it’s mostly handled as set dressing. A player becomes frustrated, begs for help and then kills themselves. While they find themselves grappling with their mental issues, clips of hollowing fans in crowded sports bars surround the scenes to show the price of battle. It hammers the message home perhaps too hard. We should be thinking more about these players as others shout battlecries for them to crush their opponents. But isn’t it obvious? Does it really need to be spelled out so forcefully as if the football-consuming public is too dim to notice?

Director Peter Landesman does his best to stir what little drama he can with the material. The fact of the matter is that Omalu’s life just doesn’t reflect as engaging of a plot as the NFL’s concussion cover-up. Most of it is just melodrama that plays out with a certain dissatisfaction at how Omalu loses the fight in a way. There is that expected boiling point where a frustrated Will Smith smashes a wall in his house repeatedly for all this hardship he has had to endure. It comes rather late, but it’s welcoming that Smith is given some more room to act in a fairly straight story.

While Concussion fumbles quite a bit, most of the anger it aims to generate for a corrupt sports organization is present. It acknowledges all the corruption, beauty, tragedy and tribalism of America’s favorite money-generating giant. If it topples, it will destroy the lives of those relying on its funds both rich and poor. But is it worth the sacrifice of so many men who will be brutalized and tossed aside by their own organization? It’s a tough question worth considering as the country heads into the playoffs. It’s also a subject that deserves more than just light drama with great performances.