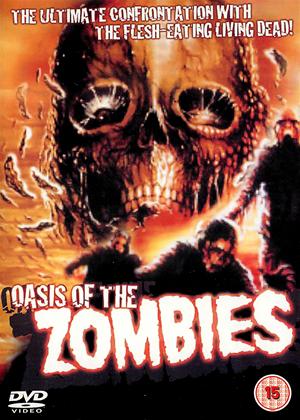 Reviews (1) of Oasis of the Zombies

Spoilers follow ... - Oasis of the Zombies review by NP

Of course, you wouldn’t expect this Jess Franco directed film to have a simple history. After rejecting the earlier ‘Zombie Lake (1981)’ (which was handed to the masterly Jean Rollin) for reasons unknown, Franco helmed this under the pseudonym AM Frank, and produced Spanish and French versions. The film has been released under several titles – ‘L'Abîme des Morts-Vivants’, ‘The Abyss of the Living Dead’, ‘Bloodsucking Nazi Zombies’, ‘El desierto de los zombies’, ‘The Grave of the Living Dead’, and ‘The Treasure of the Living Dead’.

The zombies themselves are seldom seen, and when they are, they are often viewed from behind. Their faces, featured mainly in close-ups, are impressively embroidered with convincingly rotting flesh, popping eyeballs, the occasional wriggling worm and mummified, slack open jaws.

The story – as I understand it - involves Robert (Manuel Gélin) telling, in a lengthy flashback liberally interspersed with footage from higher budgeted films, how a squadron carrying a shipment of Nazi gold is ambushed across the African desert. Robert is telling his story to bounty hunter Kurt (Henri Lambert), who then kills him. Robert’s son then vows to locate the treasure, but his expedition finds that a group of Nazi zombies are guarding it.

Meeting with a generally negative reception, the lack of Franco’s best friends sex and gore (for the most part) helps to make ‘Oasis of the Zombies’ a fairly dull affair. The cadaverous antagonists are not featured often enough, and the other characters are by and large, negligible. There are, however, some incredibly picturesque locations, and full advantage is made of them. Scenes of zombies shuffling around the dunes of a desert environment, sometimes very effectively in silhouette, look great.

The ending, as is the case with quite a few Franco films, is so abrupt that it comes from nowhere. Such is the slowness of the film (not always a bad thing, and here conjurs up some occasionally hypnotising moments) hardly commands rapt attention, and ‘The End’ credit is suddenly there, a deeply inauspicious end to a film I nevertheless quite enjoyed, given its flaws. Mind you, I enjoy ‘Zombie Lake’ too!