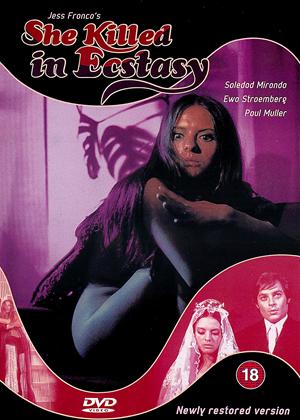 Reviews (1) of She Killed in Ecstasy

Spoilers follow ... - She Killed in Ecstasy review by NP

The mighty Soledad Miranda plays the wife of Doctor Johnson, whose experiments with embryos has caused him to be vilified by his peers and banned from continuing his work. Taking care to wear a series of tight shirts unbuttoned to reveal some handsome jewellery, he then goes through spiralling turmoil ending in suicide. His wife determines to get revenge on those who drove him to this.

As with just about all Franco films, scenes of tension are accompanied by exotic and jaunty jazz music that sometimes works because it is so inappropriate and sometimes doesn’t. The former Mrs Johnson’s subsequent seductions-prior-to-murder are scored with grimly fitting incidentals, and together with Franco’s obsession with close-ups and zoom-outs, concoct a heady, disorientating nightmare. Surprisingly, Franco regular Howard Vernon is the first person to cop it.

Apart from making her name in ‘exploitation’ films, there’s no denying Miranda’s power as an actress. She is tremendous throughout despite (on the DVD I am watching), she is buried beneath unbefitting dubbing and subtitles, and has a genuine sense of presence that makes the routine seduction/death plotline far more interesting than it would have otherwise been. Her early death on the eve of what looked like global stardom remains a great tragedy.