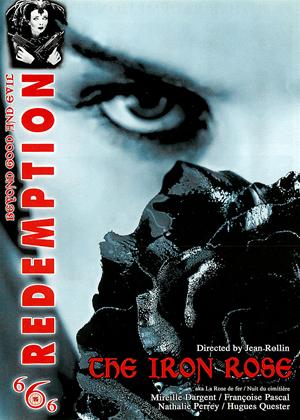 Synopsis:
This is one of Rollin's rarest films released for the first time on video anywhere. Centered on a young couple who make love in an abandoned tomb and find themselves trapped for a night among the graves and crypts of a massive cemetery. The pair frantically try to escape the haunted grounds but all in vain as they are slowly overtaken by hysteria and finally death.
Actors:
Françoise Pascal, Hugues Quester, Natalie Perrey, Mireille D'Argent, Michel Delesalle, Jean Rollin
Directors:
Jean Rollin
Producers:
Sam Selsky
Writers:
Tristan Corbière, Maurice Lemaître, Jean Rollin
Aka:
La Rose De Fer
Studio:
Redemption Films
Genres:
Classics, Horror, Sci-Fi & Fantasy
Countries:
France

Reviews (1) of The Iron Rose

After the success of Requiem for the Vampire, this is Jean Rollin’s fifth directed film. Instead of ending on a freezing, deserted beach as usual, the location actually features in one of the first scenes in this, before the two main characters (who aren’t given names as far as I can tell) arrive in the lush, autumnal cemetery which is where the remainder of the film is set.

Even by Rollin’s standards, little actually happens here. They find themselves hopelessly lost, a predicament that seems to drive the girl mad. Her madness maybe be brought on in part by the aggressive and unsympathetic behaviour of her boyfriend. It is his idea to visit the cemetery, his idea to explore and remain there, and when they get lost and she becomes frightened, his behaviour is such that I wonder if he is deliberately driving her to despair. As ever, this isn’t made clear.

What the film has though, is the usual beautifully shot location work, lending the sinister, dark-magical events a feeling of existing in a kind of dreamlike half-reality where little needs to make sense.

The Iron Rose was not successful. The male lead (Hugues Quester) had his name changed to Pierre Dupont for the release, he was so embarrassed to be part of it, while the female, played by Françoise Pascal went on to have a successful acting career in a number of UK comedy and variety shows in the 70s and early 80s before taking a lengthy break from acting (rejoining the profession in 2011). Mireille Dargent returns from Requiem for the Vampire for what is little more than a cameo as a clown, another Rollin staple.

I like the mixture of revulsion/comfort the cemetery represents against the occasionally glimpsed ‘outside world’, and the fact that the girl appears to succumb completely to it. Although this is not my favourite film by the director, it’s still hugely powerful mainly due to the location work.