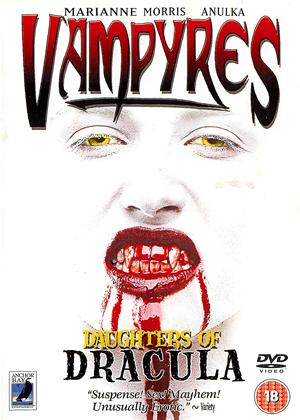 An attractive young lesbian couple are gunned down in the mansion where they live and, for some reason, then become vampiric creatures who seduce passers-by from the nearby road.

Husky, busty Marianne Morris and blond Anulka Dziubinska (billed as Anulka) as Fran and Miriam seem very at ease with the plentiful nude/sex scenes – even though the DVD extras refute this. Both actresses’ voices are also dubbed, much to their chagrin, and while such a practice seems unnecessary, the dubbing is more convincing than is often the case. They really do represent a kind of other-worldly sensuality that is essential for this kind of role. Whether stalking the misty, dewy countryside or the corridors of their magnificent home in their velvet capes, they look exactly like the spooky sirens they are meant to be. Other, sundry characters are deliberately dressed down to make the main couple look comparatively more exotic.

It’s hinted that Ted (Murray Brown), who is enticed to the country house and tormented throughout, is the man who originally ‘murdered’ the girls, although this is never really explained. Neither is the fact that he fails to recognise the house he is brought back to.

And yet the plot is not particularly high on the agenda. The endless discussions on the sophistications of wine and the charming attributes of the ladies could have been spent on making things clearer, but it seems there was an artistic decision to leave things enigmatic – which I have no problem with, as it fuels the Jean Rollin-esque dream-like atmospherics of the film. Equally, the nature of Fran and Miriam is muddy; the (rushed) ending of ‘Vampyres’ speculates they may have been ghosts all along, although the trail of bloodied destruction they leave proves them too tangible for that!