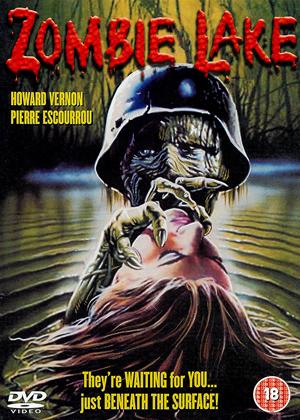 Told in flashback, a group of Nazi soldiers are killed and dumped into a lake which somehow reanimates them years later and brings them back to ‘zombie’ life. They then go on a very slow killing spree, either because they are now mindless murderers, or they are avenging themselves against the small French village that ‘killed’ them. Nothing here is elaborated upon, it just ‘is.’

Apparently French director Jean Rollin became involved in ‘Zombie Lake’ after original director Jess Franco walked out of the production. That Rollin was only given a few days notice might explain the unusually slapdash approach to the project. Here we have corpses that blink, clumsy day/night continuity problems, tatty horror make-up and a very obvious use of a swimming pool for the underwater shots (with little attempt to disguise the pool’s extremities). Franco favourite Howard Vernon plays the Mayor or the village who, in his desperation, turns to insistent journalist Katya Moore (Marcia Sharif) for help in ridding the community of the zombies. Her answer? Napalm! (At least, that is what the dubbed soundtrack tells us.)

There is a plotline concerning one of the Nazis and his past relationship with a village girl. This resulted in Helena, a (now) 10 year-old child who recognizes one of the zombies as her father (he realises this too – his wearing of his ex-partner’s necklace gives this away). He in turn protects her from the others. She is then coerced to lure the undead group into a barn with buckets of fresh blood to entice them, where they are set on fire and finally destroyed.

I found myself wondering why further bloodshed could not be spared merely by regularly feeding the zombies with blood (they appear quite docile when fed) – and then realised I was enjoying this sloppy, soft-core ‘quickie’ so much I had invested my own ‘logic’ into the storyline. It is refreshing to see zombie creatures staggering around on a killing spree in blazing sunlight, but as an overall production, ‘Zombie Lake’ possesses little of the poetry and atmosphere that defines more typical Rollin productions.