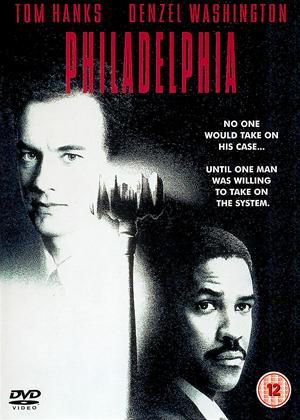 Dated and clunky, but Hanks shines - Philadelphia review by JB

Partly inspired by a real-life court case, Philadelphia is the story of Andrew Bennett, a gay man who loses his job at a prestigious law firm after they find out about him hiding his sexuality and his diagnosis of AIDS.

Tom Hanks won his first Oscar for his role here as Bennett, and is definitely the best thing about the film (with an honourable mention for the mumbling beauty of the Bruce Springsteen song of the same name that opens the movie). Hanks is a quiet, emaciated and sad, doomed angel in this movie.

Philadelphia was groundbreaking, albeit belatedly - this was Hollywood's first full depiction of AIDS that in 1993 was over a decade after the pandemic made the news. It also portrayed a same-sex romantic relationship (albeit a rather sexless and vague one between Hanks' character and Antonio Banderas) that wasn't seen as comical or sinister, unusual for a US studio movie at the time.

Unfortunately, the film hasn't aged well - for example, the Denzel Washington character, Hanks' lawyer in his case against his former employer, is depicted as a homophobe and the movie thinks that's ok. He doesn't go on a Hollywood redemptive journey of homophobe to LGBT ally… instead, he becomes just less intolerant to Hanks and his social circle, still cringing at the sight of men being affectionate to one another late on in the film in the party scene, without further comment. It's also rather worthy and bloated in its running time - there are too many opportunities for Hanks to "act", including a rather excruciatingly prolonged scene involving Hanks and Washington listening to opera, with Tom disappearing into some kind of reverie.

A Hollywood milestone probably only on paper - Philadelphia does showcase one of Tom Hanks' very best performances, but the LGBT credentials that could have made it a classic of its type are undermined by some rather suspect and clunky scriptwriting decisions.