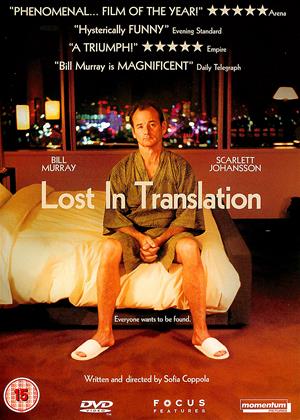 Reviews (14) of Lost in Translation

Lost In Translation is a film which is astounding in its simplicity. The portrayal of the growing relationship between two lost, lonely people will stay with you long after you have seen it. It's not a film which everyone will understand or relate to. What you will get out of this film will depend on your own life experiences. Out of everyone that watches this film half will totally get the point of, and fall in love this film. The other half will miss the whole meaning and will no doubt feel bored and confused. It's a film that conveys so many emotions. It is poignant; leaving you with feelings of both happiness and sadness. There are moments of humour, yet it is not a comedy, but it is not a drama either. It is, simply put, very real, nothing is forced. The relationship between the two characters is so well portrayed and lifelike that, as an observer, you just don't want it to end. And the purposely ambiguous ending is something very special. If you want to see something thought provoking, sensitively written, superbly acted and beautifully directed, then Lost In Translation is a must see. If you want something a bit more fluffy and less brain taxing then I suggest you rent some cheesy Richard Curtis rom-com.

8 out of 13 members found this review helpful.

Oh dear....lost in translation..more like lost the plot.. - Lost in Translation review by CP Customer

Well after all the hype, me and my partner settled down for what was billed as a rom-com.

What we saw was an admittedly beautifully filmed movie, with an interesting soundtrack to say the least, but after all the hype just what the heck was all the fuss about?

Over one and a half hours of well....not a an awful lot happening. Both of us for some reason sat through it all and then wondered what was the point?

Bill Murray deserves better than this. Definitely a case of the movie did not live up to all the hype.

Good film if you suffer from insomnia or you enjoy watching films with no point to them.

And what the hell DID he whisper into her ear at the end? Not that I care....

Not for the Vin Diesel & thong throngs... - Lost in Translation review by CP Customer

This film is beatifully made & provides a extremely refreshing change from the majority of contemporary moves that are formulaic, badly scripted, littered with corny lines & badly made.

I highly recommend this film to anyone who loves real movies. The acting is superb, the score fantastic & stands out as one of the best films of the new decade thus far...

Bill Murray and Scarlett Johansson are superb in this poignant tale of love lost and found. Highly recommended! (If you have an attention span that is not limited to playing a video game for 5 hours)

This really is a "love it or hate it" film. The concept was promising but for me, Bill Murray and Scarlett Johansson failed to convey any depth or inspire any sympathy for their characters. I feel dishonest awarding even one whole star for this film.

It was such a gripping movie, strong in human expressions ... although with a very predictable end but again .... a very tightly knit story line and fantastic performance by Bill.

I am one of the pople who adores this film. It is about a tired, disillusioned film star, who is still in great demand for his advertising pull in Japan, and his relationship with a young, intelligent, but bored woman who happens to be staying in Japan. They meet by chance and embark on a platonic friendship which could so easily develop into something else. The rapport between them and humour they share is unusual, unpredictable and thoroughly engaging. My 16-year-old son and I were engrossed for the entire film and didn't want it to end. We actually thought the ending was quite clever and it led to much discussion and philosophising about 'what happens next'.

Unlike many of her contemporaries Sofia Coppola writer and director of both The Virgin Suicides and Lost In Translation appears focused upon making films that are honest, acutely observational and believable.

It's testimony to her apparent refusal to indulge viewers' expectations or resort to Hollywood contrivances that Lost In Translation is immeasurably more genuine and charming than the majority of thoughtless films that Hollywood churns out.

Coppola also makes sure to give her actors freedom to perform, unlike many heavy-handed Hollywood directors. And it pays off brilliantly as Bill Murray gives what is the most reserved and understated performance of his career, which is also his absolute finest.

Scarlett Johansson.Scarlett Johansson is an actress who is also currently on top form. She has a truly intoxicating screen presence and produces a complex yet delightfully genuine performance.

The central characters, Bob and Charlotte, find that they themselves are lost in translation, lost in a foreign country, unable to sleep and bewildered by Japanese customs.

The cinematography is certainly inventive too. The flash cuts between scenes (which in isolation would appear to be of little importance) highlight this unstable dreamlike state that they find themselves in.

Only when they find each other and become soul mates of a sort do they begin to re-evaluate their lives and start to find new perspective through their relationship.

Ultimately they share more with each other over whiskey and cigarettes than they ever could in bed.

Starts off well but soon becomes very slow and boring.

Where was the ending..... - Lost in Translation review by CP Customer

Interesting for anyone travelling to Japan, perhaps

Not for me - Lost in Translation review by 'Mandy.C'

Not for me I'm afraid, I just didn't get it!